A grand total of 1,234,558 Third World invaders landed in Europe during 2016, falsely claiming to be asylum seekers, according to the latest figures from the European Union’s “European Asylum Support Office” (EASO). 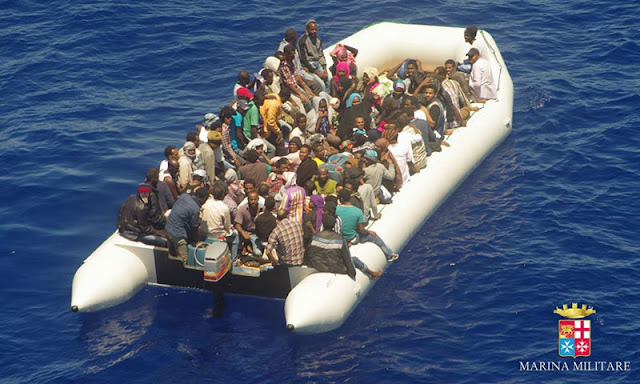 According to the latest EASO report “Latest asylum trends—December 2016,” a total of 64,513 invaders demanded “asylum” in all of the “EU+” nations in December 2016 alone.
The “EU+” nations are all 28 European Union member states plus Norway and Switzerland.
Some 4 percent of all the December invaders claimed to be unaccompanied minors (UAMs) when lodging their “asylum” applications, all hoping to be granted special permission to stay, along with increased benefits and quicker processing.
At least 18 percent of all UAM applicants claimed to be Afghans, while 13 percent claimed to be Eritreans, and 8 percent claimed to be Pakistanis.
In December 2016, EU+ countries recorded 9,661 “asylum” applications from invaders claiming to be Syrians, and 5,341 claimed to be Afghans.
4,432 claimed to be Iraqis, and these three nationalities together accounted for only 30 percent of all applications lodged in the EU+.
Invaders from Nigeria made up the next largest number in December, with 4,210 applicants, with Eritreans (3,475), Pakistanis (2,688), Albanians (2,473), Iranians (1,769), Guineans (1,555), and “Russians” (1,548) making up the rest of the top ten invader list.
The “Russians” were once again mostly from the deep south of that country, where a large mixed-race population exists. Other nations which provided “refugees” from that region included Georgia and Armenia.
Other African invaders came from Sudan, Ghana, the Ivory Coast, Mali, Gambia, Senegal, Morocco, and Algeria, the EASO report revealed.
The EASO report also revealed that the “recognition rate” for invaders claiming “asylum” reached 52 percent in December.
“Positive decisions”—that is, those granted full “refugee status” were 53 percent of that total, and 47 percent were granted “subsidiary protection”—which means a renewable residence permit of at least two years.
“Subsidiary protection” in effect means permanent residence because recipients have the right to endless renewals, and then full citizenship after five years of residence.
In December, those invaders claiming to be Syrians constituted only 15 percent of all applications, proving once again that the “refugee” hoax is mostly being used by nonwhites as an excuse to invade Europe to take advantage of European liberal delusions about asylum.
In fact, none of the nationalities in question actually qualify for asylum at all in terms of well-established international conventions.
A genuine refugee should be someone who is fleeing his homeland in fear of his life, and even Syrians do not have to flee their country, because the majority of that country is under government control and is peaceful.
The same situation applies in Iraq, and Eritrea, the two other most commonly claimed “nations at war,” and there is therefore no reason for those nationals to flee their countries either.
Furthermore, none of the other nationalities listed as making up the Third World invasion force has any good reason to “flee” either.
These facts reveal the whole “asylum” racket to be a swindle and an excuse used by scrounging Third Worlders to live off liberal European welfare handouts.