At least 11,169 Third World scroungers pretending to be refugees have invaded Europe in the first 39 days of 2017, new figures from the United Nations’ International Organization for Migration (IOM) have shown. 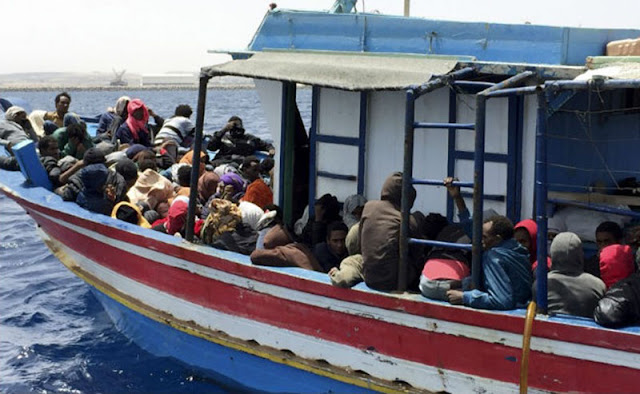 According to an IOM press release, 11,169 invaders entered Europe by sea in 2017 through February 8, with about 85 percent arriving in Italy and the rest in Greece. This compares with 76,395 during the first 39 days of 2016.
IOM Rome’s office registered 70 additional arrivals which were not included in the total, and the 9,400 invaders who have arrived in Italy since January 1, 2017, has surpassed totals for the first two months of each of the past two years.
In 2016, IOM recorded 9,101 arrivals in Italy during January and February, and 7,882 in 2015. IOM notes that “this year’s pace already out-strips either of the past two years’ two-month totals, this with nearly three weeks remaining in February.”
Meanwhile, the Hungarian government has announced plans to detain all invaders in shipping container camps near the Serbian border in Kelebia, guarded by army troops, while their “asylum” applications are processed.
The Hungarian government has said that the measure is necessary to secure the EU’s borders and deter invaders coming into the country from the Middle East via Serbia. It has already set up two razor fences on the border with Serbia and is deploying more than 600 soldiers to guard the fence.
The government is due to submit its proposal to parliament, which will then debate and vote on the measures within weeks. It will involve taking hundreds of existing “asylum seekers” to the container camps.
The new regulations will be implemented only as long as the government-declared state of emergency over mass migration is in place, such as the one currently in force.
The government’s chief spokesman, Zoltán Kovács, announced at a briefing this past week that all invaders will be detained during the entire period of their “asylum” application, rather than being released pending an appeal.
Prime Minister Viktor Orban’s chief of staff, János Lázár, added that all current and future “asylum seekers” would be transferred to container camps in a so-called transit zone near the border, where they would be held for the duration of their asylum application process.
Asylum appeals by default would  be conducted with the “asylum seeker” attending via a video link to a court, rather than in person.
“People’s freedom of movement will be removed,” said Lázár. “They will be able to stay only in a place designated for them. This place will be the state border, where containers suitable for accommodating 200 to 300 people will be erected. Migrants will have to wait there for a legally binding decision on their applications.”
The measure has become necessary because of the increased number of invaders being arrested at the Hungarian border. If they apply for asylum in Hungary, they are accorded European Union stipulated rights, which include freedom of movement—but then most abscond to Germany and northwestern Europe rather than wait for the Hungarian decision.
“What we’ve seen in the past is asylum seekers abusing the legal framework of Hungarian and EU law. Instead of waiting for the final decision, they head for Germany and the Nordic countries, and within [the] Schengen [Area] it is impossible to stop this,” Kovács explained.