You are here: Home All News
At least 120,733 Third World invaders pretending to be asylum seekers lodged applications across the 28 member states of the European Union in January and February 2017, the European Asylum Support Office (EASO) has announced.
The EASO figures are considerably higher that the numbers put out earlier by the International Organization for Migration (IOM), which only measures those landing by boat across the Mediterranean. 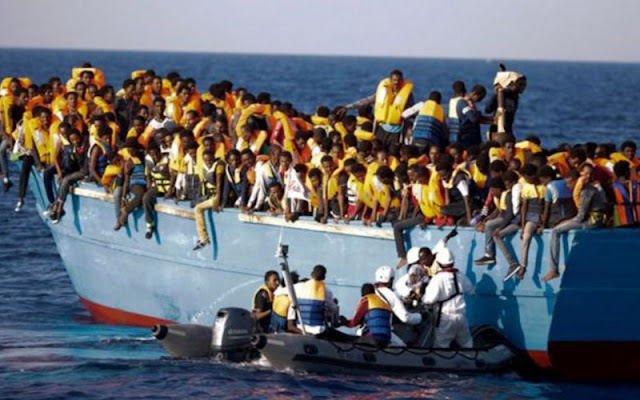 In its “Latest asylum trends – February 2017” update, the EASO said that 90 percent of all the requests were “first time applications.”
Along with the 61,697 invaders who claimed asylum in January, this means that according to official figures, 120,733 nonwhites claimed “refuge” in Europe during the two month period.
For February, 3percent of all applicants claimed to be unaccompanied minors (UAMs), and 19 percent of all UAM applicants claimed to be Afghan citizens, followed by Gambian and Pakistani citizens (10 percent each).
Also in February, similar to the previous months, Syria was claimed to be the main country of origin of asylum applicants in the EU.
The top three countries of origin remained the same as in January, although Nigeria replaced Afghanistan as the second country of origin.
Afghanistan became the third main citizenship of origin. These top-three citizenships together accounted for 27 percent of all applications lodged in the EU. Iraq ranked fourth with 3,870 applicants.
The top 10 list of applicants’ citizenships for February was completed by Pakistan (2,713), Eritrea (2,392), Guinea (1,764), Albania (1,748), Bangladesh (1,674), and Gambia (1,478).
The highest increase in number of applicants among the top 10 citizenship groups compared to January was reported for nationals from Bangladesh (+ 12 percent).
The highest drop, after Afghan applicants, was observed for applicants from Albania and Eritrea (16 percent and 13 percent, respectively).
In February 2017, 7,795 applications were made by those claiming to be Syrians, a figure which was 13 percent of the total.
This means that the remaining 87 percent do not come from countries which could remotely be recognized as having civil wars, even by the EU’s absurd standards.
In that month, 4,105 Nigerians claimed “asylum,” and Nigerian applicants exceeded Afghan and Iraqi applicants, the two citizenships that were consistently in the top three for the past year.
There were 4,041 “Afghan” applicants, and that nationality once again had the most claimed UAMs (19 percent).