You are here: Home All News
The total number of Third World invaders pretending to be refugees and making “asylum” claims in Canada for the first six months of 2017 has reached a total of 18,305, boosted largely by the invasion from the U.S. by those whose claim to asylum is so blatantly bogus that they have now abandoned any hope of swindling legal status in that latter country. 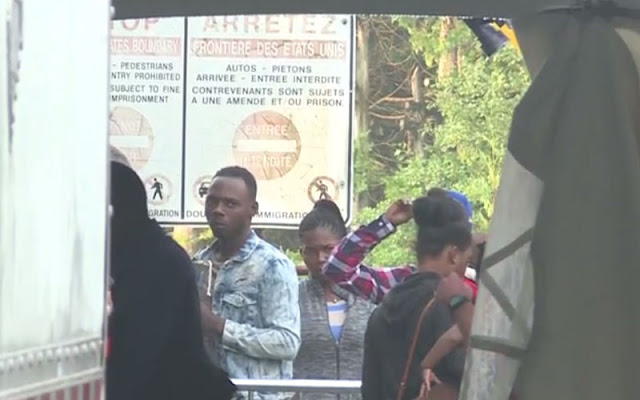 According to official figures provided by the Canadian government‘s Immigration and Refugee Board of Canada, at least 4,345 nonwhite invaders living in America have poured across the border into Canada in the hope that they can parasite off the race-denying liberals in that country.
At the same time, Canada Border Services Agency (CBSA) agents posted at Canadian airports registered 1,500 “asylum” claims from invaders arriving by air—also mostly from the U.S.
CBSA agents posted at land points of entry registered a further 6,420 “asylum” claims, with most being registered at the U.S.-Canadian crossing points into Quebec and Ontario. A further five invaders landed by sea in Quebec.
A further 1,110 invaders were registered at inland offices –which means they entered Canada legally or illegally without being intercepted and then applied once in the country.
Together, these figures mean that a total of 9,040 invaders were registered by the CBSA from January to June 2017.
However, the number of asylum claimants processed by Immigration, Refugees and Citizenship Canada (IRCC) for the period January to June 2017 was 9,270, which, when added to the CBSA figures, gives the 18,305 total, the official statement concluded.
The flood is increasing, with so many invaders pouring over the Canadian border from the United States that authorities opened Montreal’s Olympic stadium—a 56,000-seat arena and one of the city’s most famous landmarks—as a temporary welcome center last week.
Montreal Mayor Denis Coderre tweeted on Wednesday that as many as 2,500 asylum seekers entered Quebec via the United States during July, and about 500 people are currently being held at St-Bernard-de-Lacolle, where Quebec borders New York State.
About 70 percent of asylum seekers who have recently arrived in Quebec are Haitian, according to the province’s Immigration Minister Kathleen Weil.
Although the 2004 U.S-Canada Safe Third Country Agreement requires asylum seekers to “request refugee protection in the first safe country they arrive in,” the thousands entering at remote locations along the border aim to avoid the agreement’s main tenet, laughably arguing that the U.S. is no longer a “safe” place for them.