More than 1.1 million nonwhite invaders pretending to be refugees lodged claims for “asylum” in Europe during the first eleven months of 2016, just 130,000 less than for the same period in 2015, according to new figures released by the European Asylum Support Office (EASO). 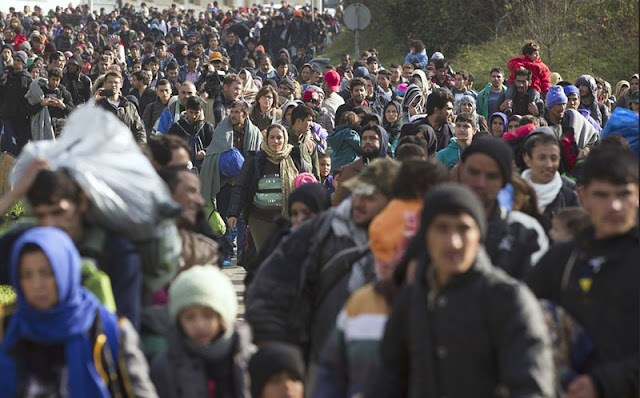 According to the “Latest asylum trends–November 2016” report from EASO—an official European Union” organization—exactly 1,171,138 “asylum” applications were recorded from January 1 to November 31 in the “EU+” nations. The EU+ is composed of the 28 EU nations, plus Norway and Switzerland.
Some 75,844 applications were made in the month of November 2016 alone.
The total for the first eleven months is only 6 percent less than in the same period of 2015, when 1,242,572 applications were lodged, the report continued.
Four percent—that is, 46,845, of all applicants claimed to be unaccompanied minors (UAMs) when lodging an application.
Of this UAM number, 22 percent claimed to be Afghanistan citizens, 12 percent claimed to be Eritreans, and 10 percent claimed to be Gambians.
Syria and Afghanistan remained the top two claimed citizenships of applicants, but the third top country of origin changed compared to previous months, with Nigeria replacing Iraq.
Iraq (5,097) and Eritrean (3,845) nationals ranked in fourth and fifth position, while the top ten of citizenship list was completed by Pakistan (3,277), Albania (2,847), Iran (2,071), Bangladesh (1,987), and Guinea (1,732).
In October 2016, Syria remained the main country of origin of applicants with 11,295 applications. This was 15 percent less than the number of Syrian applications recorded in October and the lowest number of Syrian applicants since April 2015.
The share of Syrians in the total of applicants also became smaller, down from 23 percent in September 2016, to 15 percent in November.
Syrian applicants remained widespread throughout the EU+ with 19 EU+ countries counting Syrian nationals among their top-three citizenships of applicants.
Afghan numbers also fell for the third consecutive month, with a drop of 29 percent to 7,235 applications in November. This was the lowest number since May 2015.
In November 2016, the number of Nigerian applicants increased by 6 percent to 5,603. Compared to November 2015, about 2,683 more Nigerian applications were recorded in November 2016.
Three EU+ countries counted Nigerian applicants among the top-three citizenships, namely Italy, Austria, and Ireland.
The number of decisions in “asylum” cases rose during November 2016, when EU+ countries issued 130,542 “first-instance” decisions, about 18 percent more than in October 2016.
The EU+ “recognition rate”—that is, the number of applications approved, reached 53 percent in November, five percentage points lower than in the previous month.
More positive decisions granted “subsidiary protection” (52 percent of all positive decisions) than “refugee status” (48 percent). Although there is supposed to be a difference in residence status between the two groups, in reality there is none, as all get to stay.
The recognition rate for Afghan nationals was on the same level as in the previous month: 34 percent.
The number of decisions on Iraqi applications increased by 22 percent to 14,526, with a 60 percent recognition rate. Most Iraqi applicants were issued refugee status (67 percent of all positive decisions).
Of 10 citizenships with the most first-instance decisions issued, Eritrea showed the second highest recognition rate (92 percent).
The lowest recognition rates were observed for Albanians (2 percent), Pakistanis, and Nigerians (7 percent).
At the same time, the number of cases awaiting a first-instance decision stood at 943,261 applications.