You are here: Home All News
At least 22 percent of all federal inmates in the U.S. are nonwhite illegal immigrants from central and South America, and cost the American taxpayers a minimum of $1.3 billion every year, new figures from the Department of Homeland Security (DHS) have revealed. 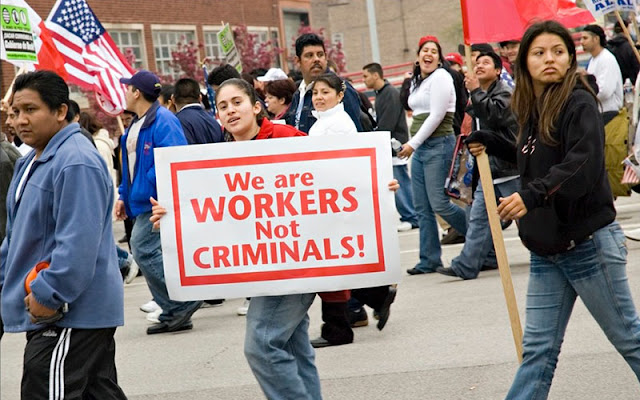 According to a DHS statement, some 22 percent of all federal inmates are “illegal immigrants” and virtually all are in deportation proceedings.
The Justice Department’s Bureau of Prisons, fulfilling a presidential executive order requiring transparency on prisoner immigration status, said that it houses 187,855 inmates of which 42,034 are foreign born.
The DHS report said that only seven of those 42,034 have been granted deportation “relief.” According to DHS:
19,749 (46.9 percent) are aliens who have received final orders of removal.
21,121 (50.2 percent) are aliens who are under ICE investigation for possible removal.
1,157 (2.8 percent) are aliens whose cases are pending adjudication before an Immigration Judge in the Executive Office of Immigration Review (EOIR).
7 (.0002 percent) are aliens who have been granted relief.
The DHS said that the U.S. Marshal Service has a similar breakdown in its cells. Of 50,135 they’ve detained, 12,005 “self-report” as illegals. They are all in some type of deportation proceeding:
9,857 (82.1 percent) are aliens who have received final orders of removal.
2,047 (17.1 percent) are aliens whose cases are still pending adjudication before an immigration judge in the EOIR.
101 (.8 percent) are aliens still pending adjudication (U.S. Immigrations and Customs Enforcement has charged these aliens as removal cases, but a final disposition has not yet been reached.)
According to experts the percentage of prisoners who are illegal immigrants is down slightly, but still remain a significant population.
Jessica M. Vaughan, director of policy studies for the Center for Immigration Studies, said “For a long time the number of non-citizens serving time in federal prison has been disproportionate to their share of the population. This is because a disproportionate number are border-related crimes, such as human smuggling and drug trafficking, and some are immigration offenders. These crimes are most often committed by citizens of other countries, and these numbers show why we need to control our borders.”
Under Trump, she added, the percentage is likely to go higher.
She also said that the numbers show that illegal immigrants with criminal records need to go. “This does not mean that non-citizens are more criminal than Americans, but it does mean that they clearly are not less criminal, and that there are certain crimes that are more closely associated with non-citizens, and certain crimes that are taking place because we do not have a secure border. When we do, and when all criminal aliens are deported instead of released, then the proportion of non-citizens in federal prison will go down.”
The DHS statement said that President Trump’s Executive Order on Public Safety in the Interior of the United States requires the Department of Justice and Department of Homeland Security to collect relevant data and provide quarterly reports on data collection efforts, and that this data “shows a significant prison population of incarcerated aliens.”
According to the Federal Register, the fee to cover the average cost of incarceration for Federal inmates in Fiscal Year 2015 was $31,977.65 ($87.61 per day).
This works out to $1,344,148,540 per year, at 2016 rates. This figure does not, of course, include the incarceration cost at local level, nor the hospitalization or other social costs incurred by the nonwhite illegal invader population within the U.S.