At least 3.5 million Third Worlders have invaded Europe since 2013 pretending to be refugees—a number which is greater than the populations of Luxembourg, Cyprus, Estonia, Latvia, Slovenia, and Lithuania. 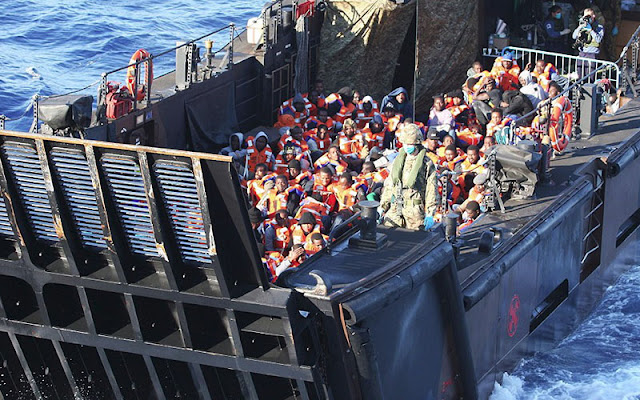 According to a press release issued by the European Commission, a total of 1,204,300 fakers pretending to be refugees lodged “first time asylum claims” in 2016.
This figure, the statement said, was “slightly down” from the invasion statistics of 2015.
In 2015, the European Union’s official statistical bureau, Eurostat, reported that a total of 1,325,000 invaders had landed in Europe from the Third World.
In 2014, at least 625,000 fake asylum seekers landed in Europe, official figures showed, while the number for 2013 stood at 435,000.
This means that in the four year period from 2013 to 2016, at least 3.5 million Third Worlders invaded Europe, swindling their way in to take advantage of liberal European welfare and “asylum” rules.
The extent of the fraudulent nature of this “asylum” racket becomes clear when it is considered that every single one of these invaders crossed multiple safe countries before reaching Europe’s borders, and therefore long since lost any claim to be “fleeing” for their lives.
The truth of this is seen from the latest figures from Eurostat, which revealed that the majority of “asylum seekers” were from Syria, Afghanistan, and Iraq—all nations which have “safe zones” not at war.
Afghanistan in particular is regarded as so safe, even by the United Nations, that that organization has an active repatriation program for Afghans from neighboring Pakistan, which is literally moving over a million Afghans back home.
Nonetheless, the Eurostat figures said that 334,800 “first-time asylum seekers” claimed to have come from Syria, 183,000 from Afghanistan, and 127,000 from Iraq.
About 60 percent of the total number (722,300) were registered as “asylum seekers” in Germany.
The next largest number of “asylum” registrations was made in Italy (121,200, or 10 percent), France (76,000, or 6 percent), Greece (49,900, or 4 percent), Austria (39,900, or 3 percent), and the United Kingdom (38,300, or 3 percent).
The 3.5 million figure is put into perspective when the following European nations’ total populations are considered:
Malta: 425,384, Luxembourg: 549,680, Cyprus: 858,000, Estonia: 1,315,819, Latvia: 2,001,468, Slovenia: 2,061,085, Lithuania: 2,943,472, Croatia: 4,246,700, and Ireland: 4,604,029.
There is no sign of the flood abating, and these figures make it clear that unless the nonwhite invasion is halted and reversed, Europe is going to be overrun by the Third World within a matter of years, rather than decades.