You are here: Home All News
At least 400 illegal invaders have been arrested every day by the U.S.’s Immigration and Customs Enforcement (ICE) agency between January and April this year—most of them violent criminals left free to prey upon Americans by the previous Obama regime. 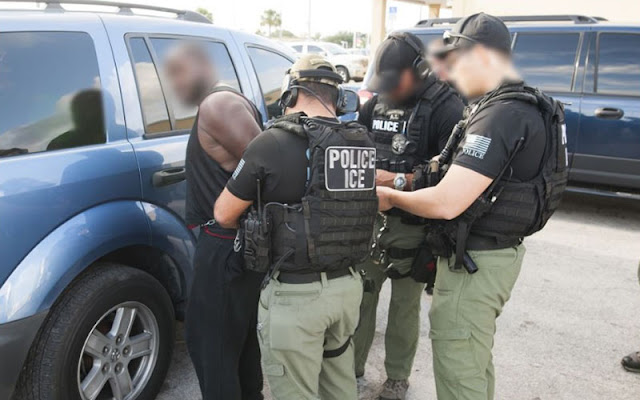 According to an official statement released by the ICE on its website, in the 100 days since President Donald J. Trump signed Executive Orders (EOs) regarding immigration enforcement priorities, ICE “has arrested more than 41,000 individuals who are either known or suspected of being in the country illegally.”
This reflects an increase of 37.6 percent over the same period in 2016.
“Between Jan. 22 and April 29, 2017, ICE Enforcement and Removal Operations (ERO) deportation officers administratively arrested 41,318 individuals on civil immigration charges,” the statement, says, adding that between Jan. 24 and April 30, 2016, ERO arrested 30,028 invaders.
“These statistics reflect President Trump’s commitment to enforce our immigration laws fairly and across the board. ICE agents and officers have been given clear direction to focus on threats to public safety and national security, which has resulted in a substantial increase in the arrest of convicted criminal aliens,” ICE Acting Director Thomas Homan said in the statement.
Nearly 75 percent of those arrested during this period in 2017 are convicted criminals, with offenses ranging from homicide and assault to sexual abuse and drug-related charges.
The arrest of aliens at-large in the community increased by more than 50 percent, from 8,381 last year to 12,766 arrests this year during the same period.
The arrest of convicted criminal aliens climbed nearly 20 percent, from 25,786 last year to 30,473 this year.
Violent crimes such as homicide, rape, kidnapping and assault accounted for more than 2,700 convictions.
In total, since the President signed the EOs, ICE’s immigration enforcement activity has resulted in more than 400 arrests per day, including the capture of egregious and violent offenders, such as:
* The Feb. 16 arrest in New York City of an MS-13 gang member, Estivan Rafael Marques Velasquez, a Salvadoran national with a criminal history in the U.S. which includes reckless endangerment in the second degree, criminal possession of a weapon in the fourth degree, and disorderly conduct.
* The March 9 arrest in DeKalb, Georgia, of Jose Mercedes Meza-Ignacio, 52, a citizen of Mexico residing in Atlanta, wanted on criminal charges for child molestation.
* The April 10 arrest in Dallas, Texas, of Juan Antonio Melchor Molina by the agency’s Dallas Fugitive Operations Team. Molina is the subject of a 2011 murder warrant issued by the Prosecutor General’s Office in San Luis Potosi, Mexico. Mexican authorities allege that Molina shot and killed Jorge Alejandro De La Rosa at a wedding in 2008.
* The April 13 arrest in Denver, Colorado, of Jose Victor Bonilla-Melendez, one of ICE’s “Most Wanted Fugitives,” in Denver, Colorado, following a public tip. Bonilla-Melendez is also known as Anthony Garcia-Melendez, a citizen of Honduras whose criminal history includes felony convictions for assault causing serious bodily injury, sexual assault and unlawful re-entry after deportation.
* The April 26 arrest in Houston, Texas, of William Magana-Contreras, a Salvadoran MS-13 gang member wanted for aggravated homicide in his home country.
While these data clearly reflect the fact that convicted criminals are an immigration enforcement priority, Homeland Security Secretary John F. Kelly has made it clear that ICE will no longer exempt any class of individuals from removal proceedings if they are found to be in the country illegally.
This is evident by the rise in non-criminal arrests over the same period, which increased from approximately 4,200 in 2016 to more than 10,800 in 2017.
This announcement follows a significant gang announcement made by ICE’s Homeland Security Investigations last week in which 1,095 confirmed gang members and associates were arrested.