You are here: Home All News
4,084 North African invaders pretending to be refugees were arrested for thousands of serious crimes in the German cities of Cologne and Düsseldorf in 2016, North Rhine Westphalia (NRW) Interior Minister Ralf Jäger has admitted.
The serious crimes included rape, robbery, theft, housebreaking, and drug smuggling in a crime wave described even by a liberal member of the state legislature as “alarmingly high.” 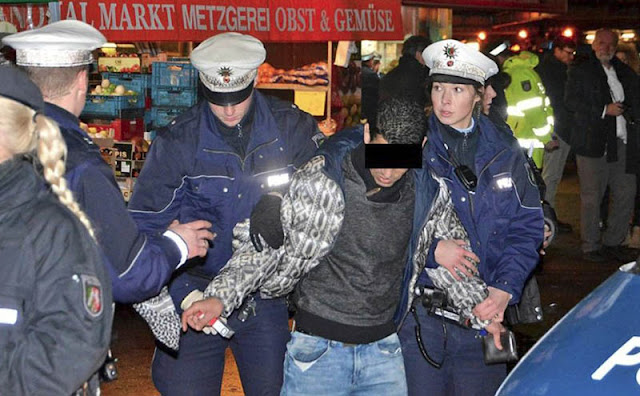 The figures only emerged after Jäger—a member of the far left Socialist Party of Germany (SPD)—was forced to reveal them in the NRW state parliament through a question submitted by assembly member Marc Lürbke, from the liberal Free Democratic Party (FPD).
According to the figures, 1,659 North Africans were arrested in Düsseldorf during 2016, and 2,425 in Cologne.
In Dusseldorf, the statistics said, the North Africans—called “Maghreb-origin” after the geographical region of Africa where they originate—committed 443 assaults, 17 sexual assaults, 577 violent crimes, 679 thefts, and 54 “predatory thefts.”
In Cologne, the invaders committed 3,039 serious crimes, including 63 major robberies, 1,148 thefts, 619 physical assaults, and 64 sexual assaults.
Lürbke was taken aback at the statistics, telling the Bild newspaper that the “number of offenses is alarmingly high.”
Meanwhile, despite German Chancellor Angela Merkel’s promises to “speed up” deportations of “failed asylum seekers” to North Africa in particular, statistics showed that only 400 Maghreb nationals had been sent back home from Germany in all 2016.
A further 9,035 had been served with deportation notices—consisting of 1,515 Tunisians, 3,736 Moroccans, and 3,784 Algerians.
These Muslim states simply refuse to cooperate with any European government in taking back their nationals, and do not even bother to respond to requests to facilitate the deportations.