At least 14 Muslim immigrants in Austria, originating from the Balkans and Syria, have been arrested in a series of raids in Vienna and Graz by anti-terrorist police on charges of involvement in ISIS activities. 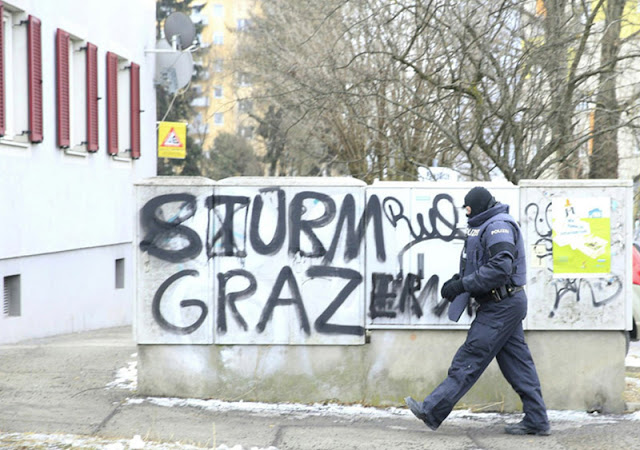 According to Austrian media sources, more than 800 police officers from Austria’s anti-terrorist unit simultaneously searched several properties in the two cities.
Three of those arrested were described as “Austrians with a migration background,”—that means legal immigrants—two as “Bosnians,” and one each from Syria, Bulgaria, and Macedonia.
The men are all aged between 21 and 49 years old, a spokesman from the Graz Public Prosecutor said.
Eight of those arrested—four in Vienna, and four in Graz, had arrest warrants out for them, the spokesman added.
In addition to these eight pre-planned arrests, the others were held after being found at the searched premises, but three were released almost immediately, with eleven remaining in custody.
Of those arrested in Graz, three were women, and two of them are married to the already identified suspects. All of them come from the Balkans, where a large Muslim community dates from the time of the Ottoman Turk invasion of Europe.
The premises raided included Muslim associations in both cities.
Meanwhile Austrian interior minister Wolfgang Sobotka has announced the government’s intention to expand video surveillance throughout the country, increase the monitoring of already identified “threats,” and introduce “centers of repatriation” for rejected, but “non-traceable asylum seekers.”
Graz Freedom Party (FPÖ) city council member Mario Eustacchio said in his reaction that the blame for the terrorist threat was the “welcoming culture” created by the Austrian Peoples’ Party (ÖVP), the Socialist Party of Austria (SPÖ), the Communists, and the Greens.”
Eustacchio said he hoped that an “anti-terrorism operation of this magnitude against Islamists in Graz will be seen as a sign of the total failure of current asylum and immigration policy.”
The police have declined to release any further details on the arrests, but one newspaper, the Kronen Zeitung, claimed that the arrested Muslims were part of a network established around well-known Muslim preacher Mirsad O., alias “Ebu Tejma,” who was sentenced to 20 years’ imprisonment in Graz last summer for his involvement in ISIS recruitment, and incitement to murder.
Last week, a 17-year-old of Albanian origin was arrested in Vienna while planning a bomb attack in the city, An accomplice was arrested in Neuss, Germany over the weekend, where it was revealed that they had both experimented with making explosives.
Austrian authorities estimate that at least 300 Muslims with Austrian citizenship have left the country to go and fight for Isis in Syria. Of that number, about 40 have believed to have been killed, and at least 90 have come back.