You are here: Home All News
A formal attempt to hold a weekend where “nobody kill anybody for 72 hours” in the 72 percent nonwhite city of Baltimore, Maryland, has ended in predictable failure with a mass shooting and two homicides. 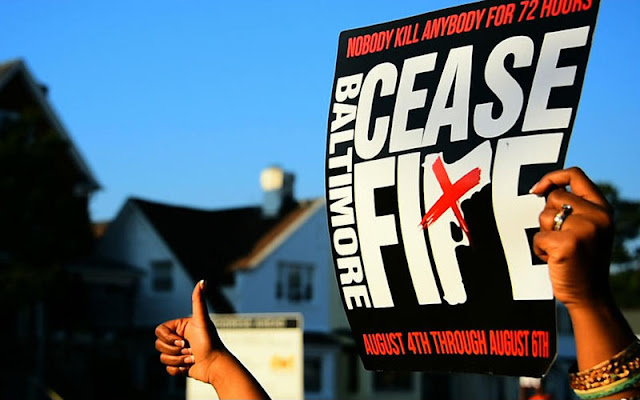 The attempt to hold a “ceasefire” weekend is in itself an excellent indication of the incredibly high violent nonwhite crime plague which is tearing apart Baltimore—and almost every single other major nonwhite majority city in America.
As the Baltimore Sun had to admit, the organizers of the “72-hour Baltimore ‘ceasefire’ initiative marched and prayed Saturday, even as they acknowledged that their fervent pleas for peace could not halt the relentless pace of shootings and killings in Baltimore.”
Campaigners held vigils, cookouts, and some stood on corners with signs reading “Baltimore Ceasefire” or “Free Hugs.”
“But even as ceasefire events continued late Saturday afternoon and into the evening, police reported three shootings, two of them fatal,” the Baltimore Sun continued.
A 24-year-old man was shot in Pigtown, near Carroll Park, around 5 p.m. Saturday and pronounced dead at Maryland Shock Trauma Center.
A 37-year-old man was killed in a shooting in the 1600 block of Gertrude Street in Northwest Baltimore about 10 p.m.
A nonfatal shooting occurred earlier in the afternoon in the 4800 block of Park Heights Avenue.
The Ceasefire volunteers were joined by a representative of Mayor Catherine Pugh, who listened to pleas from residents “to reopen a nearby recreation center to offer children a constructive place to spend their time”—as if a “recreation center” is the answer to the black gun crime plague.
“If you want to stop the killing, you need to open the rec centers. There’s nowhere else for these kids to go except the street,” said Nichole Dawkins, 47, who lives a block away from where the homicide took place. “We need more than just talk. We need action. You can’t lead kids to a rec center if it’s closed.”
According to a database held by the Baltimore Sun, there have been 210 homicides in Baltimore alone this year, with six alone for the first five days of August.
The murder rate in the city is steadily increasing as the number of whites decrease as a percentage of the population. The Baltimore Sun’s statistics show that there were:
318 homicides in 2016
344 homicides in 2015
211 homicides in 2014
235 homicides in 2013
217 homicides in 2012
197 homicides in 2011
224 homicides in 2010
240 homicides in 2009
234 homicides in 2008, and
282 homicides in 2007. 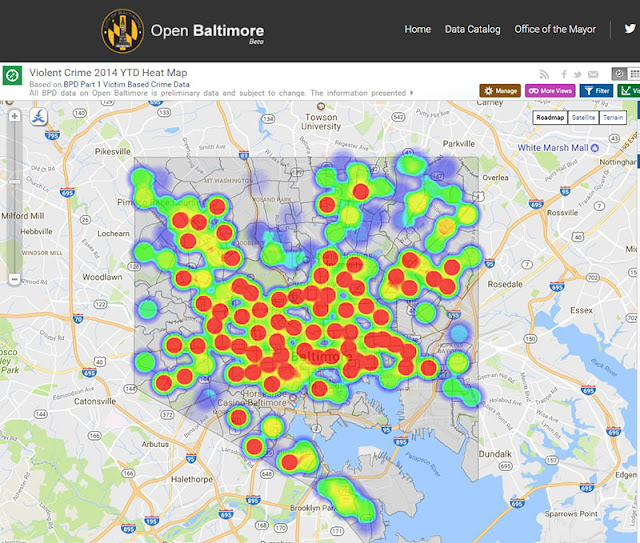 Baltimore Police Department Crime “Heat Map”
At the same time, Baltimore police reported a “string of armed robberies” in the city’s Charles Village and Oakenshawe neighborhoods near the Johns Hopkins Homewood campus.
Since July 28, seven armed robberies have been reported in the north of University Parkway. In the most recent robbery, at about 4:25 p.m. Saturday, three students were walking in the 200 block of Chancery Road when two suspected robbers got out of a vehicle, walked up to the victims and one pointed a handgun at the victims and demanded money and cell phones, according to Campus Security.
A home owner nearby who came out to investigate was also robbed by the third suspect, Campus Security said
The suspects’ in the most recent case are described by security as a black male, dark complexion, teens to mid-twenties, little hair on the face, and one arm in a sling; a black male, 5’3”, very thin, short black hair, tattoos on neck and arms, wearing a black Jordan tee shirt and armed with a black handgun with a silver slide; and a black male, 5’8”, very thin, black hair, wearing a red T-shirt.