The arrest of a possible accomplice—yet another Tunisian invader pretending to be a refugee—of the Berlin truck terrorist attacker, combined with the news that the terrorist travelled to the Netherlands, France, and Italy—and had the key to a mosque in the city of Dortmund—has cast further light on how the liberal-created nonwhite invasion has completely overrun western Europe. 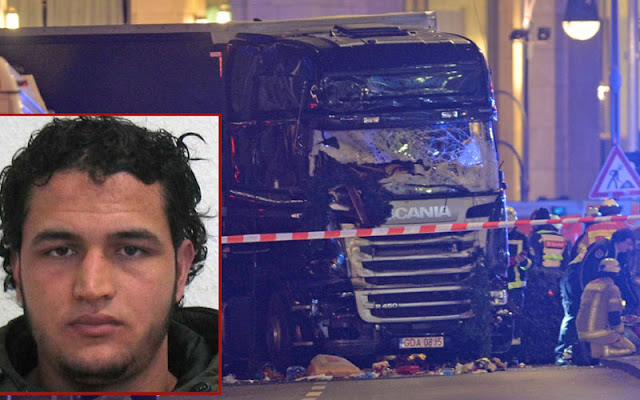 According to Der Spiegel, federal investigators arrested a 40-year-old Tunisian invader in Berlin believed to have helped Anis Amri, the refugee-terrorist who attacked a Christmas market, killing 12 people.
German police stormed the Tunisian’s “living and business premises” in the Tempelhof district of Berlin in the early hours of December 28, reports said.
The second arrest follows an analysis of data found on Amri’s cell phone, police said.
“Further investigations indicate that he [the second suspect] could have been involved in the attack,” a statement from the Berlin Federal Prosecutor said.
Other data from the refugee-terrorist’s cell phone showed that just minutes before he drove the truck into the Christmas market, Amri sent voice and text messages to fellow Muslim invaders in Berlin and the Ruhr region of western Germany.
After escaping from the attack scene—while German police were following another fake refugee, a Palestinian invader fitting his description and behaving strangely near the scene—Amri is believed to have first travelled to the state of North Rhine-Westphalia, where he had a large number of contacts.
He even had a key to a mosque in Dortmund, the Westdeutscher Rundfunk (WDR) news service reported, indicating that he had strong support among the already established invader community.
In all, Amri visited twelve mosques in Dortmund, and also worked as a preacher in some of them.
WDR also reported that the North Rhine Westphalia authorities knew that the refugee-terrorist was using at least eight aliases, and that he had applied for “asylum” under one of these names in Oberhausen at the end of April 2016.
One day after the attack, on December 20, Amri’s email account and Facebook profile were accessed at 11 a.m. from an internet cafe in Emmerich in North Rhine Westphalia.
Two days after the attack, Amri was spotted at the Dutch train station of Nijmegen, near the German border.
The French TV station TF1 reported Amri had then moved to Amsterdam, where he had caught a bus to Lyon in France. This movement had apparently been tracked through a Dutch cell phone sim card found in Amri’s backpack.
Surveillance cameras filmed Amri at the Part-Dieu station in Lyon, where he caught a train to Milan via Turin. In Milan, he made his way to the suburb of Sesto San Giovanni—obviously on his way to some point of refuge, having travelled for over 24 hours without a break at that stage.
There, he was stopped by a chance police patrol, where he was shot after starting a firefight with two policemen.
Amri’s path through four western European states, his ability to rely on an already established network of supporters—with the Dortmund mosque key indicating friends at the highest levels in Muslim colonizer circles—is the clearest demonstration yet of the consequences of the race-denying “open borders” immigration policies followed by the ruling elite.
The events also make it equally clear that unless this mass Third World invasion is not only halted, but reversed in its entirety, western Europe will inevitably become an extension of the Third World, a mixture between the Middle East and sub-Saharan Africa.