You are here: Home All News
The state of California has joined the cities of Chicago and San Francisco by suing the U.S. Department of Justice (DOJ) over federal restrictions on law enforcement grants to illegal invader supporting “sanctuary cities,” 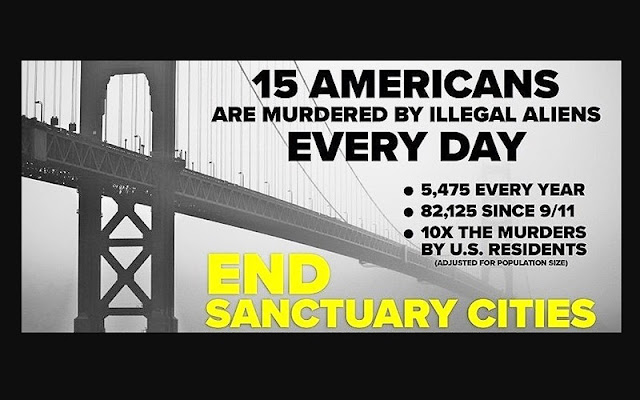 San Francisco filed its lawsuit against the DOJ late last week, arguing that the federal government has improperly sought to force local jurisdictions to enforce national immigration law by imposing funding conditions.
President Donald Trump issued a broad executive order in January targeting federal funding for cities that offer illegal invaders refuge by refusing to their resources to enforce basic immigration laws.
At the time, Trump and the DOJ pointed out the vast numbers of illegal invaders have serious criminal records and are responsible for a massive crime wave under which Americans suffer, both physically and financially.
The Justice Department then sought to impose conditions on a national grant for local law enforcement that mandates access to local jails for federal immigration officials, as well as 48 hours notice before releasing anyone wanted for immigration violations.
California’s lawsuit opposing those conditions, as well as San Francisco’s case, is similar to a legal challenge filed last week by the city of Chicago.
In a statement, the Mexica-origin Xavier Becerra—who is now California Attorney General—said the state, not the federal government, is best suited to determine how best to allocate its law enforcement resources.
“When President Trump threatened to defund our local law enforcement’s ability to do its job and protect our people, he picked the wrong fight,” Becerra said.
The Trump administration contends that local authorities endanger public safety when they decline to hand over for deportation illegal immigrants arrested for crimes.
California receives about $28 million a year in federal law enforcement funding that would be subject to the new conditions, the state said in its lawsuit.
San Francisco City Attorney Dennis Herrera—whose father was a Colombian—said on Monday said San Francisco receives about $1.4 million in such funds. Immigration enforcement is the federal government’s job, he said.