You are here: Home Europe
Police in Cologne, Germany, will deploy helicopters, horses, thousands of extra officers, and female police officers trained to handle sex offenses over the New Year’s Eve period in a desperate attempt to avoid a repeat of last year’s mass nonwhite invader sex attacks in the city.
In addition, barriers will be put up to restrict the number of people allowed access to the city center, and “spotter” officers will be deployed to elevated points around the main squares. 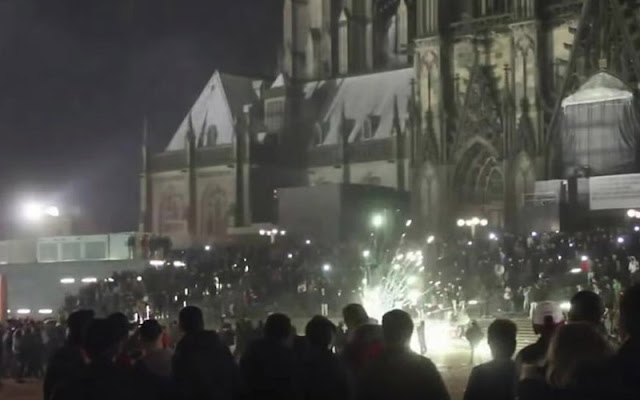 The detailed plans were revealed in a city police report obtained by the German media.
“We will have more than 1,500 police officers in Cologne during this upcoming New Year’s Eve and over 100 teams of three officers each in the area of the central station alone,” Christoph Schulte, a spokesman for Cologne’s police department, told Deutsche Welle.
“They will be recognizable by special vests and available at the scene for any possible complaint,” he added.
Police are also planning to use high definition CCTV cameras to help more easily identify any perpetrators, after their attempts last year failed miserably.
Although well over 1,200 attacks—by Third World invaders pretending to be refugees—upon white women took place last year, police only managed to bring 124 criminal investigations to any conclusion, and so far, only 24 of the 35 nonwhites charged have been convicted.
In the very first case to come before the court, an Iraqi and an Algerian were convicted for taking part in several assaults. During that court case, it emerged that the Algerian invader had threatened the fiancé of one of the victims to “give the girls” to him or die.
Race-denying liberals have long struggled to explain the mass sex attack which took place in Cologne—and many other German cities—on New Year’s Eve 2015.
The state parliament of North Rhine Westphalia, for example, where Cologne is located, recently commissioned a “report” from the former head of Germany’s Central Office for Criminology to try and “explain” why the attacks took place.
The report’s author, Dr. Rudolf Egg, said that “there were too many men in the same place at the same time” for the attacks to have been completely unplanned.
“It’s conceivable this was done by word of mouth in refugee homes or other residential accommodation, or there was a plan using social media such as Facebook or WhatsApp,” he said.
He said that the “majority of perpetrators” didn’t go to Cologne specifically to commit sexual offenses, and that it was “only after the men realized that police were not intervening, that the attackers felt encouraged to carry out the sexual assaults.”
In discussing what the perpetrators’ motives might have been, Egg referred to the “broken windows theory,” according to which the inhibition to commit crimes plummets when an offense can be committed anonymously and the chance of prosecution is not expected.
“This was precisely the case in Cologne,” Egg said.
This weak explanation does not, of course, address the real issue at hand: namely that a mass sex attack of this kind was previously unknown until Angela Merkel opened Germany’s doors to the mass Third World invasion of 2015.