The Danish “integration minister” Inger Støjberg has angered Communists and pro-invasion activists by posting a photo in which she posed with a cake to celebrate her 50th law change restricting immigration to Denmark. 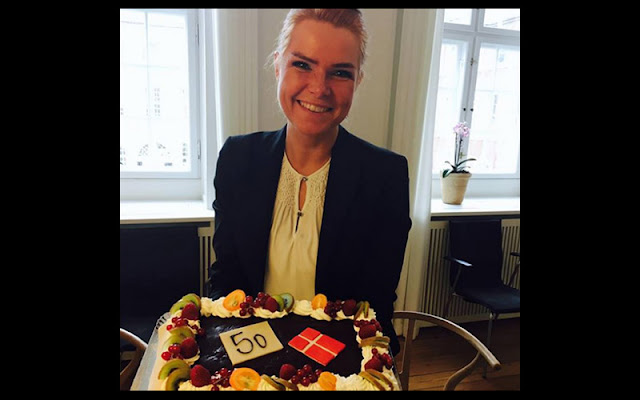 Støjberg posted a picture of herself holding a birthday cake on Facebook, writing that she had decided to mark her 50th immigration curb since taking over as Minister for Integration in 2015.
“Today the 50th restriction was passed on immigration. This must be celebrated!” wrote Støjberg and linked to a ministry web page which listed all the measures she had implemented.
The list included a “new and stricter citizenship test,” the ability to detain asylum applicants pending “identity determination,” the suspension of “automatic judicial review” against appeals, the limiting of “residence duration permits” to asylum seekers, and the introduction of rules revoking residence permits of those going on holiday back in their home countries while applying for asylum in Denmark.
Other limits included the right to expel crime-committing “asylum seekers,” and reductions in benefits across the board.
None of these measures actually address the real issue—namely, that of the swamping of Denmark by Third Worlders—but even these mild measures have earned Støjberg the scorn and hatred of the controlled media inside and outside of Denmark.
Støjberg’s post immediately gained attention on Facebook, with 5,000 reactions and 600 comments within the first hour making it the current most reacted-to post in Denmark, according to the newspaper Politiken.
Støjberg defended her decision to post the picture, telling newspaper Jyllands-Posten that it is “not so unnatural to celebrate political victories.”
Asked by the Jyllands-Posten whether she understood why there was criticism of celebrating restricted immigration with cake, the minister responded, “No, I find that very hard to understand. The restrictions mean that we can send a billion [kroner] to a number of developing countries in the region [closest to refugee source countries]. So I think there’s a very good reason to celebrate it.”