You are here: Home All News
History was made this past week when the Danish parliament officially adopted a motion opposing the ethnic cleansing of white European people by Third World immigration, and called on that country’s government to take urgent steps to prevent white Danish people from becoming a minority.
The groundbreaking motion—which was fiercely opposed by the openly communist parties and the crypto-communist “socialist” parties in parliament, was passed on February 15. 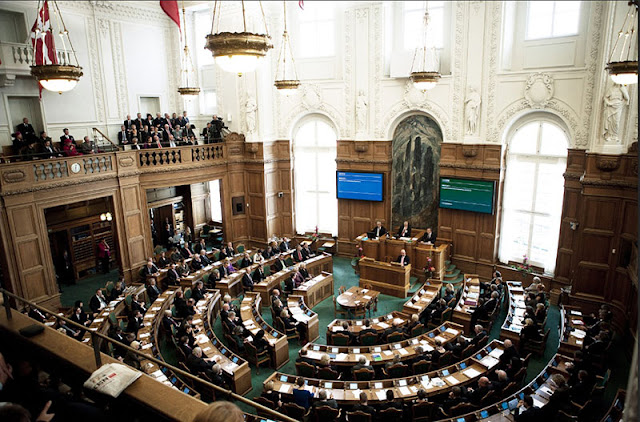 Titled “About the number of residents in Brøndby Strand with immigrant backgrounds,” the motion reads as follows:
Parliament notes with concern that today there are areas in Denmark, where the proportion of immigrants and descendants from non-Western countries is over 50 percent. It is the belief of the Folketing [parliament] that Danes should not be in the minority in neighborhoods in Denmark.
The government and parliament have implemented a number of austerity measures that have limited asylum flows significantly, and which prevents parallel societies.
Parliament calls on the government to proceed with a political objective to reduce the number of asylum seekers and the number of family reunification, coming to Denmark.
The motion was adopted by 55 votes to 54 in the 170-seat parliament, and was proposed by Martin Henriksen from the Danish People’s Party (Dansk Folkeparti), Jakob Engel Schmidt from the Left, Denmark’s Liberal Party (Venstre Danmarks liberale parti), Laura Lindahl from the Liberal Alliance (which uses that English name), and, ironically, Syrian-origin Naser Khader from the Conservative People’s Party (Det Konservative Folkeparti).
The motion was opposed by the Social Democrats (Socialdemokraterne), the Red-Green Alliance (Enhedslisten—De Rød-Grønne), The Alternative (Alternativet), the Radical Left (Det Radikale Venstre), and the Socialist People’s Party (Socialistisk Folkeparti).
Not all Danish parliamentarians were present for the vote, but the four parties who voted in favor of the motion together hold 90 of the 170 seats, so the motion would have likely been passed had all members been present.
The current Danish Prime Minister Lars Løkke Rasmussen, of the Venstre party, governs in a loose coalition with the support of the other three parties which voted for the motion.
The motion was created after Danish media reports revealed that out of the 14,754 citizens living in Brøndby Strand, 51 percent are either immigrants or their descendants who were born in Denmark.
In Odense, immigrants and their descendants also constitute more than half the residents. Some 8,645 are of Danish origin, while 8,749 are either immigrants or their descendants.
According to the only available figures from Statistics Denmark—which are outdated—other areas with large “non-western” immigrant populations include Brabrand (36 percent), Ishøj (32 percent), Bronshoj (28 percent), Tilst (28 percent), Aarhus V (27 percent), Taastrup (24 percent), Copenhagen NV (23 percent), and Esbjerg Ø (22 percent).
It is still not clear exactly how the new motion can be implemented by the Danish government, but the mere fact that a European parliament has finally officially taken notice of the ethnic cleansing of white people by Third World immigration, is a breakthrough in itself.