You are here: Home All News
Mass Third World immigration has imported the threat of Muslim terrorism to America, forcing the FBI to have open terrorism investigations in all 50 states of the union. 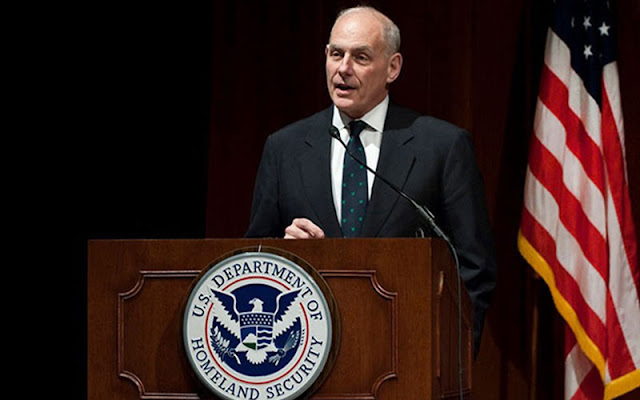 According to the U.S. Department of Homeland Security’s Secretary, John Kelly, since 2013 there have been 37 ISIS-linked plots to attack America.
Speaking at a function organized by the George Washington University Center for Cyber and Homeland Security, Kelly said that this was “all bad news, but it gets much worse.”
He pointed out that experts had estimated that “perhaps 10,000 citizens of Europe have joined the caliphate in Syria and Iraq,” and that “thousands more are from nations in Asia, Africa, and the Western Hemisphere.
“They have learned how to make IEDs, employ drones to drop ordnance, and acquired experience on the battlefield that by all reports they are bringing back home.
“And as the coalition we lead wins against what are best described as conventional-terrorist formations in the caliphate, the expectation is that many of these ‘holy warriors’ will survive departing for their home countries to wreak murderous havoc in Europe, Asia, the Maghreb, the Caribbean and the United States.”
Kelly went on to point out that “because many are citizens of countries in our Visa Waiver Program, they can more easily travel to the United States which makes us a prime target for their exported violence.”
Kelly added that the threat was not just coming from overseas.
“Over the past few years, we’ve seen an unprecedented spike in homegrown terrorism. In the past 12 months alone, there have been 36 homegrown terrorist cases in 18 states.
“These are the cases we know about—homegrown terrorism is notoriously difficult to predict and control.”
Kelly said that the “homegrown violence” was being fed by the Internet.
“From anywhere, all across the world, terrorist organizations are sharing hateful propaganda with impressionable people.
“They publish revolting how-to manuals, teaching their followers how to build bombs and kill innocent people.
“They trade dehumanizing pictures with grotesque captions—headless bodies, innocent people being thrown from buildings, rape victims being stoned to death.
“If you are a terrorist with an internet connection, like the one on your ever-present cellphone, you can recruit new soldiers, plan attacks, and upload a video calling for jihad with just a few clicks.
“And thanks to new and ever improving and proliferating encryption and secure communication techniques, it’ll be a lot harder to find you and stop you before you take innocent lives.”
The figures show clearly that there is a definite link between mass Third World immigration and terrorism in the U.S.—and that until this inflow is halted and reversed, the threat is going to increase in severity.