You are here: Home Europe
Establishment parties in the Netherlands have still been unable to form a government, more than two months after elections in that country—all because none of them want to form an alliance with the second-placed Freedom Party of Geert Wilders. 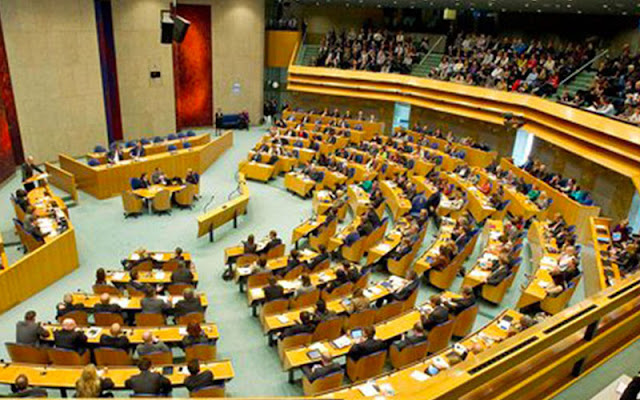 The efforts to clinch a coalition formally collapsed after what the chief negotiator for the Volkspartij voor Vrijheid en Democratie (People’s Party for Freedom and Democracy, VVD), described as “differences over immigration” policy has sunk all efforts.
The VVD, the party of outgoing Prime Minister Mark Rutte, took 33 seats at the March 15 election, to the Freedom Party’s 20. There are 150 seats in the Dutch parliament, and because the Dutch proportional electoral system has no cut-off percentage to qualify for seats (in Germany, for example, a party must get at least 5 percent of the vote to even start being allocated seats), there are now 13 different parties represented in the Dutch parliament.
Rutte’s efforts to form a four-party coalition collapsed after eight weeks of talks when differences with the crypto-communist GroenLinks (Green-Left) proved too great, especially with the other two would-be coalition partners, the Christen-Democratisch Appèl (Christian Democratic Appeal, CDA), and the far left Democraten 66 (Democrats 66, D66).
Both the CDA and D66 have 19 seats each, but in combination with Rutte’s VVD they still fall short of the 76 MPs needed for a parliamentary majority.
Rutte’s party is now looking to form a possible alliance with the small ChristenUnie (Christian Union, CU) party, which has five seats in the parliament.
That proposal has apparently already been rejected by the D66, whose leader has announced that this would “pull the coalition too far to the right”—an indication of just how far left-wing all these parties actually are.
The Socialist Party—Rutte’s natural ally—made a pre-election promise not to enter into an alliance with Rutte, and appear to be to sticking to this pledge, placing their 14 seats out of reach of any coalition.
None of the parties will even consider an alliance with Wilders, so his 20 seats are also condemned to opposition status.
The fractured nature of the electoral system in the Netherlands has often caused problems in forming governments. Rutte took nearly eight weeks to form a coalition in 2012, and, in 1977, the country was without a government for a record 208 days.