The controlled media’s claim that there were “ten attacks per day” on “refugees” in Germany during 2016 is utterly false, as a study of the original data reveals that two-thirds of the “offenses” have nothing to do with physical attacks on “refugees,” and that the figures even include at least 156 criminal acts committed by “refugees” themselves. 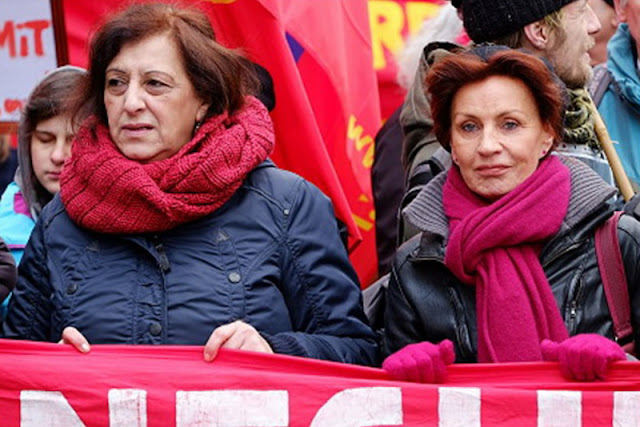 Originator of the fake news report, Ulla Jelpke, right, photographed during the February 2016 annual memorial march for the founders of the German Communist Party, Rosa Luxembourg and Karl Liebknecht.
The story that there were “ten attacks per day” on refugees originated with a self-confessed Marxist politician and member of the Bundestag for Die Linke (“The Left”) party, Ulla Jelpke, in a post on her website.
Die Linke is the direct descendent of the communist SED party which ruled the former East Germany until 1990, and Jelpke serves as that party’s domestic affairs spokesman.
Jelpke wrote on her website that there had been “3,500 reported attacks on refugees and their accommodations” during 2016, producing as evidence for her claim a German Ministry of the Interior report to a parliamentary question she had asked about these “attacks.”
Jelpke provided links to the two-part Interior Ministry report, here and here.
The Interior Ministry report bears absolutely no resemblance to Jelpke’s claims, and in fact proves the complete opposite.
The report lists a total of 3,527 offenses related to “refugees.” These offense categories—41 in total—include “crimes” such as “insult,” “displaying signs from unconstitutional organizations,” and, the single largest offense category, “racial incitement.”
Of the 3,527 “offenses,” no less than 1,040 are listed under the “racial incitement” category. These are almost all related to social media posts about the Third World invasion—and therefore not “physical attacks” at all.
In addition, the Interior Ministry report is at pains to point out there is no correlation between the reported offenses and any convictions, as the Federal states do not provide any data on the number of arrests or convictions for each offense.
This means that many of the listed offense categories—such as, for example, “coercion”—are likely to be completely unrelated to any “attacks on refugees by right wingers” and are likely to have been committed by “refugees” themselves against other “refugees.”
The same might be said for a large number of the other offense categories, such as those classified under “theft,” “robbery,” “predatory extortion,” “forged documents,” “confidentiality violations,” and even the one “sexual coercion/rape” offense reported.
It is extremely unlikely that any of these crimes would have been committed by “racist right-wing attackers,”—especially the rape!—but are mostly likely to have been committed by the “refugees” themselves.
In fact, the Interior Ministry openly admits that at least 156, and possibly more, of the offenses cannot be linked to what the report calls “Politically Motivated Crimes—Right wing” (PMK-Rechts).
Furthermore, the breakdown of the offenses listed proves conclusively that there have been nowhere near “ten attacks per day” on “refugees and their accommodations” as Jelpke—and the controlled media—claimed.
Broken down by offense category and the number of incidents, the Interior Ministry report states the following:
“Threats”: 110
“Insults”: 253
“Endorsement of criminal offenses”: 2
“Abuse of confessions, religious and worldview associations”: 7
“Especially serious theft”: 7
“Particularly severe disturbance of the peace”: 4
“Formation of terrorist groups”: 2
“Arson”: 51
“Theft with weapons; Group theft; Apartment burglary”: 1
“Falsification of evidence-based data”: 2
“Dangerous bodily injury”: 178
“Damage to Community Property”: 18
“Offenses under the Law on Explosive Substances”: 12
“Law for the Protection of Youth in the Public (Propaganda offenses)”: 1
“Domestic disturbance of the peace”: 17
“Promotion of the use of hazardous fire”: 2
“Bodily harm (assault)”: 171
“Coercion”: 251
“Calling in Public for Offenses to be Committed”: 98
“Robbery”: 6
“Predatory extortion”: 2
“Predatory theft”: 1
“Damage to property”: 595
“Serious Arson”: 44
“Sexual coercion; rape”: 1
“Disruption of public peace through threats of criminal offenses”: 60
“Defamation”: 1
“Slanderous speech against politicians”: 4
“Forged Documents”: 2
“Dissemination of propaganda from unconstitutional organizations”: 185
“Anti-constitutional denunciations of constitutional bodies”: 2
“Confidentiality Violations”: 2
“Offenses under the Assembly Act (illegal gatherings)”: 20
“Use of signs of unconstitutional organizations”: 368
“Racial Incitement”: 1040
“Offenses under the Law on Firearms”: 11
“Resisting law enforcement officers”: 2
“Theft”: 8
“Illegal detention of person”: 2
“Instruction to commit offenses”: 1
“Personal injury through the recording of images without permission” (committed at a “refugee center” by a “refugee” illegally filming officers working there): 1
This means that, taking all incidents of “arson” (95), “theft” (17), “assault” (349), “Damage to property” (613), “robbery” (6), and even the one “sexual coercion/rape” as having supposedly been committed by “right wingers” directly against “refugees and their accommodations,” this still means that there were in reality “only” some 1,081 physical attacks during all of 2016.
Even this figure is, as discussed above, most likely too high as many of the offenses would have been committed by “refugees” against other “refugees.”
This revised “attack rate” translates to an average of 2.9 per day—which is much closer to official figures released earlier in February 2017 by the Bundeskriminalamt (Federal Criminal Police, or BKA) in its annual statistical report.
The BKA report said there had been 970 “offenses against asylum seekers” registered during the 2016 year, an average of 2.6 every day.
The claims by Jelpke and the controlled media of “ten attacks per day” are therefore utterly bogus and devoid of all truth.
Although some might suggest that Jelpke’s “error” might be down to incompetence on her part, it is however more likely that she has deliberately distorted and lied about the report for her political ends, confident that the controlled media would simply take her word for it and repeat her fantastic lies.
In this view, Jelpke has been proven correct—not a single media outlet, apart from the New Observer, has actually bothered to read the original Interior Ministry report.
The controlled media has simply repeated the Marxist politician’s claims without any attempt at fact checking—even when the original sources were provided.
This serves as a perfect example of the sort of fake news which has come to characterize the controlled media—and why so few people trust it anymore. 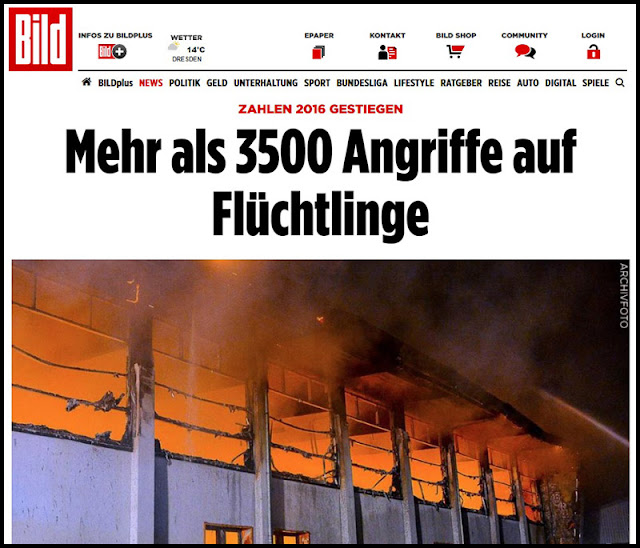 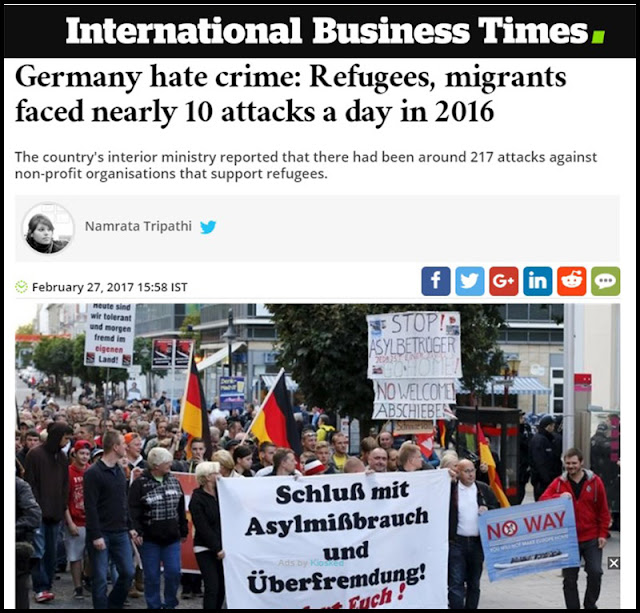 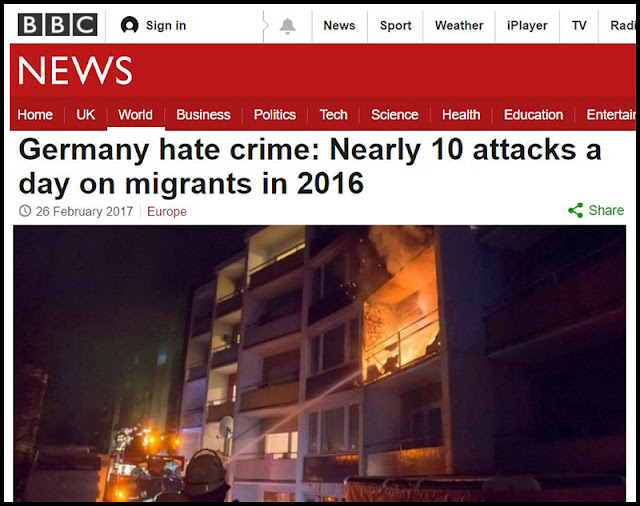