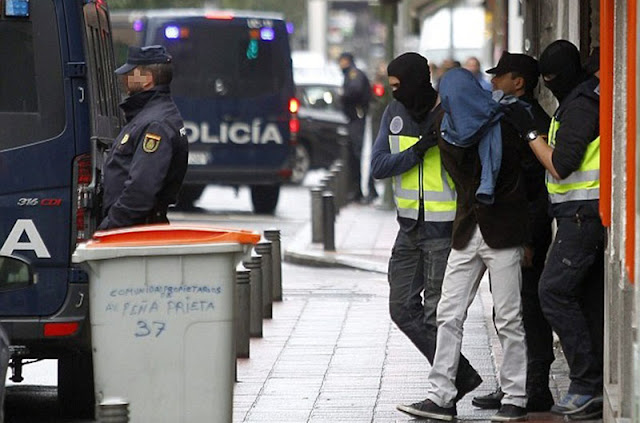 Spain’s interior ministry revealed that police had detained a Moroccan with Dutch identity documents in the northwestern city of Figueres.
The Moroccan, a member of ISIS, had recently returned to Spain from Turkey—and had started his return journey from Syria, it is alleged.
The authorities are investigating whether his return “was motivated by a desire to carry out some sort of action in Europe,” the ministry said in a statement.
The ministry said Spanish police were able to locate the man thanks to the help of Dutch authorities and of the intelligence services of several unnamed countries.
“Investigators are currently trying to determine the degree of radicalization of the detainee, his possible links in Europe, the activities he has been carrying out for Daesh, and what his purpose was since his arrival in Spain,” the statement said, using an Arabic acronym for ISIS.
In a separate operation, police detained two Spanish men who were part of a group “that had reached a very high level of determination to carry out terrorist activities.”
The group was “fully aligned with the strategy of the terrorist organization Daesh,” the ministry said in a separate statement.
Police seized a long gun and three knives during searches of six houses carried out as part of the operation in Ceuta, the tiny Spanish territory bordered by Morocco and the Mediterranean Sea.
The latest arrests bring to 181 the number of nonwhites arrested in Spain since 2015, when the mass Third World “refugee” invasion first started.
Meanwhile, Hungarian authorities said they arrested two young nonwhite women, with Belgian and French nationalities, on their way to join ISIS in Syria.
The two were caught while trying to cross into Serbia, a police spokesperson told Hungarian news agency MTI. The women were traveling on a bus from Vienna to Sofia from where they planned to reach Syria.
They were subject to warrants issued for previous “acts in connection with terrorism,” Gyorgy Bakondi, Hungarian Prime Minister Viktor Orban’s chief security advisor, told public television. No further details were released.