You are here: Home All News
Four people were killed–including a policeman, the “middle-aged Asian” terrorist, and two civilians, in a major nonwhite Muslim terrorist attack near the Parliament building in London, Britain, At least 50 people have been injured. 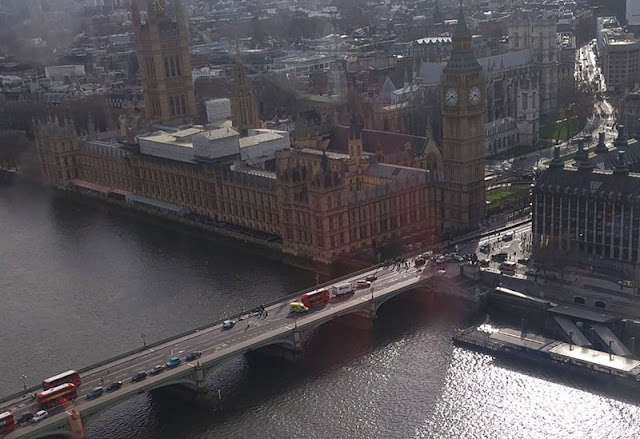 The attack took the form of a Hyundai Hatchback carrying out a ramming attack on the famous Westminster Bridge which approaches the parliament building from the south.
After running over and wounding several civilians, the vehicle then struck the railing at the parliament building. The drivers, described as an “Asian” by witnesses, then sprang from the vehicle and stabbed a nearby policeman.
Other officers in the area then opened fire and wounded the nonwhite attacker, who dropped his large knife at the scene.
Quentin Letts, the Daily Mail’s parliamentary sketchwriter, said he saw a man in black attack a police officer outside Parliament before being shot two or three times as he tried to storm into the House of Commons, the Press Association reports.
“I saw a thick-set man in black clothes come through the gates into New Palace Yard, just below Big Ben,” he told the BBC.
“He had something in his hand; it looked like a stick of some sort, and he was challenged by a couple of policemen in yellow jackets.
“And one of the yellow-jacketed policemen fell down and we could see the man in black moving his arm in a way that suggested he was stabbing or striking the yellow-jacketed policeman.”
The other officer ran to get help and the man in black ran about 15 yards toward the entrance, he said. He added:
“As this attacker was running toward the entrance two plain-clothed guys with guns shouted at him what sounded like a warning; he ignored it and they shot two or three times and he fell.”
There is no official estimate of the number injured in the incidents today in Westminster, but police fear they may run into double digits.
The Press Association reported that many have been wounded with “catastrophic” injuries” according to a doctor at St Thomas’ Hospital.
Matt Haikin, 44, from London who works in international development was on the scene immediately after one person was hit by a car and as shots were fired inside the parliament grounds. He told the Guardian he feared another Paris attack was under way.
“I was cycling from the West End up the Embankment and saw a black car on the pavement right next to Big Ben with the front all smashed in with a body next to it. I thought it was just an accident and carried on cycling past and noticed people running around and I thought ‘what is going on’. A few seconds later I heard shots coming from inside the parliament grounds. I then realised this was not just another accident.”
He said the body next to the car “wasn’t moving and there was a lot of blood”.
“There were students shouting because there was a lot of blood. It felt like about 10 seconds after [that I heard the shots] but it could have been a bit longer because by that point I was starting to get a bit scared. I think there were three or four shots but I couldn’t swear to that.”
He said the shots came from the yard in front of the Palace of Westminster.
“As I looked [through the railings] there were people milling around and I think a couple of bodies on the floor. I couldn’t tell if they were injured or had just been asked to lay down. The police at that point started to appear and were moving everybody back.
“I felt shock. At the point that I thought maybe this was a bigger thing I started to get scared, but it calmed down pretty quickly and then it was just, shit, what is going on.”
Hurrell said that the car had come to a halt following shots.
“There were shots to stop the car. The car turned, went completely over the cycle lane and rammed nose-first into the parliamentary fence. There was someone on the ground on the right of the car. They didn’t look very good.”.
The attacker was identified as 52-year-old Khalid Masood, who had been born in Britain of a mixed-race relationship. His real name was Adrian Russell Elms, but he changed it to Khalid Masood after he converted to Islam.
In 2000 he was sentenced to two years in prison for grievous bodily harm after a knife attack in a public house in Northiam in Sussex. In 2003 he was sentenced to a further six months in prison for possession of an offensive weapon following another knife attack in Eastbourne in Sussex. He also had convictions for public order offences going back to 1983.
In 2010, Masood was investigated by MI5 for “violent extremism” due to links with a group of Islamists later convicted of plotting to bomb a Territorial Army base in Luton. He was described as “a peripheral figure” and, following a risk assessment, MI5 decided he did not pose a threat.