You are here: Home Europe
The now annual New Year’s Eve car arson rampage in France’s major cities—carried out by gangs of nonwhite invaders for “fun”—saw at least 945 vehicles burned out, a 17 percent increase over the previous year’s “festivities.”
The increase in arson attacks has become a political hot potato in France, as the race-denying government continually covers up the fact that it has a major—and growing—nonwhite crime problem, driven by decades of legal and illegal Third World immigration. 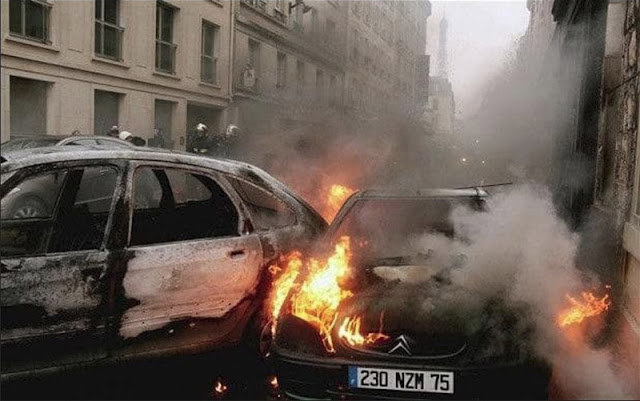 Burning cars in Paris: The Eiffel Tower can be seen through the smoke.
For example, a statement released by the French interior ministry admitted that 945 vehicles had been torched over the evening of December 31, 2106, into the morning hours of January 1, 2017, and that it was an increase over the previous year, but claimed that the night “went off without any major incident.”
There had been, the interior ministry insisted in a statement, only “a few troubles with public order.”
In reality, French police arrested more than 454 individuals overnight, the vast majority from the banlieues, or nonwhite-dominated outer suburbs of Paris and other cities.
As part of their cover-up attempts, the Interior Ministry earlier claimed that only 650 cars had been torched—saying that this figure was only the number of vehicles “set on fire” and not those destroyed in the ensuing flames.
The attempt to hide the true number of vehicles torched was however obvious, as in previous years, the total number always included the grand total of cars destroyed, and never just the ones “set on fire.”
This manipulated lower figure enabled the French government to claim that “Once again this year, the overall number of vehicles burned demonstrates that, however intolerable, the phenomenon is contained”—even though by this devious calculation, there had still been an increase in arsons of 8 percent over the previous year.
The nonwhite gangs not only torched vehicles, but also attacked first responders and firefighters.
A firefighter in the eastern department of Ain was hurt while trying to extinguish a burning car, while in Nice, two police officers were hurt when the gangs threw “projectiles” at them.
The “custom” of setting fire to parked vehicles in the streets of France’s cities dates back to 1991, when the phenomena was first seen around Strasbourg, eastern France, in that city’s “high-immigrant districts.”
The “tradition” quickly spread to other nonwhite-dominated suburbs in France’s other major cities, to the point where cars were torched this year in the shadow of the Eiffel Tower itself.