Francois Fillon, the French establishment’s “secret weapon” they planned to use against the Front National’s Marine le Pen in the upcoming French presidential election, has seen his polling figures crash in the wake of a financial scandal involving the alleged misuse of hundreds of thousands of public funds. 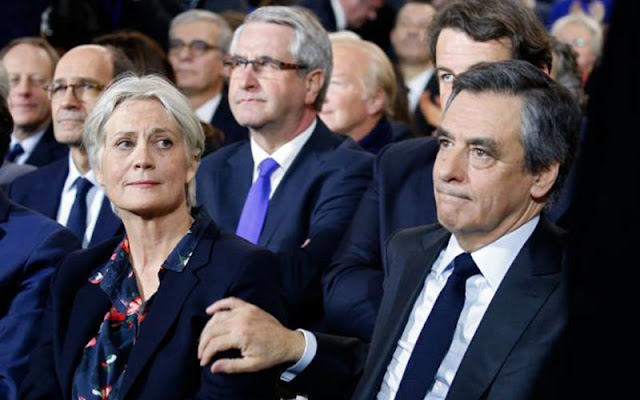 According to controlled media polls, Fillon had been the “favorite” to win the presidency for Le Republicains—the French conservatives—in the second round of those elections.
It has been widely predicted that Le Pen would win the first round, with Fillon coming second. Then, in the follow-up round, Fillon would—as is usually the case—unite conservatives, liberals, leftists, communists, and greens into an “anti-FN” coalition, and win.
All was apparently going according to plan until a French newspaper, Le Canard, revealed that Fillon’s British-born wife Penelope was paid €500,000 ($539,114) out of parliamentary funds for working as an “assistant”—except that she had several times been on the record saying she did not work and stayed away from her husband’s political career.
Penelope Fillon has always said she prefers being at the couple’s 12th-century chateau in western France with their children and horses, rather than being involved in political life in Paris. She has said she doesn’t have a professional role and last year told a French journalist she had “never been involved in her husband’s political life.”
Penelope Fillon’s salary was very high for a “parliamentary assistant,” reaching €7,900 ($8,514) a month—three or four times the going rate.
The French prosecutor’s office is also investigating another case involving Penelope Fillon, in which she was paid an additional €5,000 a month between May 2012 and December 2013 by a literary review owned by a billionaire businessman friend of Fillon.
The editor of that publication is on record as saying that he had never seen her at the magazine and only knew of two short book reviews she wrote during that time, published under a pseudonym.
Almost instantly, Fillon—who had been campaigning on a platform of “honesty and openness”—saw his approval ratings collapse. An Oxoda poll conducted after the first reports emerged said that Fillon has lost 16 points since the week before.
Part of the collapse is due to the fact that Fillon’s election program had been the cutting of 500,000 public service jobs—a slap in the face for those workers when it was revealed he had used public money to pay his own wife for a made-up public service job.
The latest developments include the news that Fillon also employed both his sons as assistants—one in a legal capacity even before he was qualified as a lawyer—and an early morning raid on January 31 by police on Fillon’s offices in search of further evidence of wrongdoing.
Before the scandal broke, polls suggested that Le Pen and Fillon were both commanding more than 25 percent support in the first round.