As many French women as men now back the Front National’s Marine le Pen—a development which has boosted her chances of winning the all-important expected second round of voting, scheduled for May 7, especially if her opponent is anyone from the far left. 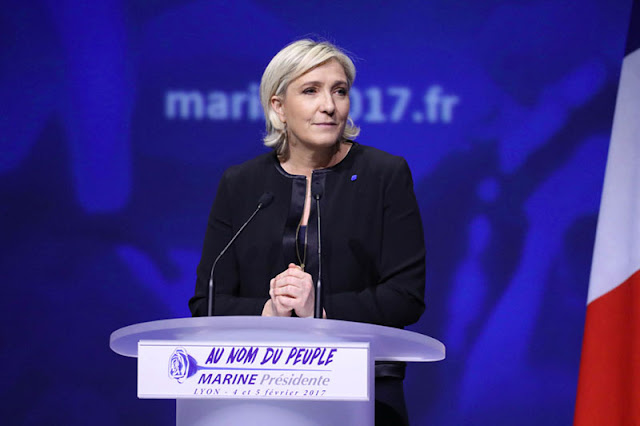 In the 2012 presidential election, Le Pen won 17 percent of female voters, compared with 20 percent of men. Now, according to a new poll from Ifop, she is attracting 26 percent of voters of both sexes, making her the most favored candidate among women for the first round.
The poll revealed that the Front National leader has already gained at least two million additional female voters, and her latest election video shows that she is aiming to attract more, leading far leftist sociology professor and professional “anti-racism” activist Nonna Meyer to tell Bloomberg news that “women are the key. These women often abstain and now they are backing Le Pen to protect their jobs and their security. This is not a feminist vote.”
Apparently, Bloomberg revealed, while women make up just over half of the electorate in France they are far less likely to turn out than men, “offering a well of untapped support for the candidate who manages to tune into their concerns.”
At the beginning of February, the Le Pen campaign began distributing millions of copies of a brochure that set out her plan to “defend French women” as the country’s first female president.
The pamphlet was interspersed with pictures of her navigating “the world of men” as a sister, mother, lawyer, sailor, and political leader and included a promise to be a shield against Islamic fundamentalists who, she said, want to stop women “wearing a skirt, going to work, or to the bistro.”
According to the latest polls—and as far as they can be trusted—Le Pen stands to get around 28 percent of the vote in the first round on April 23. This will translate to well over 10 million votes.
If, as is expected, the vote goes to a second round—on May 7—she needs in theory about another 8 million votes to win.
The latest poll predicted the conservative Fillon at 20 percent and the far left’s Emmanuel Macron—who is running for his own party, En Marche! (“Forward”)—at 18.5 percent.
Another two far left candidates, the Socialist Party’s Benoît Hamon and the La France insoumise (“Unsubmissive France”) candidate Jean-Luc Mélenchon, will each poll about 13 percent of the vote in the first round, according to the polls.
In theory, the far left and the conservatives always join together against the FN in the second round, but this time there are a number of factors which could possibly alter this outcome—with the primary one being if the two far left candidates can strike an alliance before the first round—a logical step because together their vote totals are nearly on a par with Le Pen’s.
Reuters quoted a research memo from Bruno Cavalier, chief economist at Oddo Securities in Paris, as saying that Le Pen does indeed “have a chance” if she faces Fillon or Hamon in the run-off.
In that scenario, according to the memo, turnout may be depressed and Le Pen “could win with as few as 14 million votes,” Cavalier said, although he gave “her just an 11 percent chance of victory.”
Reuters added that bookmakers rate Le Pen’s chances much higher at 34 percent, and the pollster Elabe showed the FN leader exceeding 40 percent in the run-off against either Fillon or the independent Emmanuel Macron for the first time.
If that poll is accurate, then Marine Le Pen might be closer to the Élysée Palace than one may think.
* Earlier this week, during a visit to Beirut, Le Pen refused to wear a head scarf to meet with a senior Muslim official, who insisted she don one. With neither side backing down, she left without seeing him.