You are here: Home All News
Yet another racially-motivated black-on-white racist murder spree—this time in Fresno, California—has confirmed the reality that there are far more murders of whites committed by nonwhites than vice versa—even if the controlled media continually tries to portray otherwise. 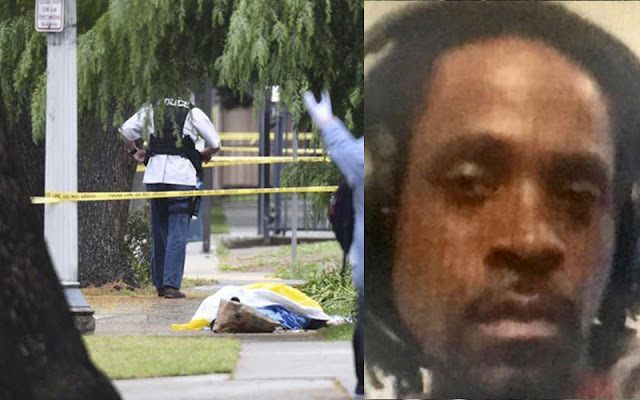 In the latest incident, a black named Kori Taylor (who changed his name to Kori Ali Muhammad when he converted to Islam as a teenager—fatally shot three white men with a .357 revolver in the streets of Fresno.
Before surrendering to police, he allegedly shouted “Allahu akbar” and expressed hatred toward white people and the government, according to Fresno Police Chief Jerry Dyer.
According to the LA Times, Muhammad told his family there was a war going on between blacks and whites in America.
On social media, he referred to white people as “devils.” Earlier in the year, he released a rap album replete with violent, explicit, racially-charged lyrics, including referring to himself in one song as a “black soldier.”
The duration of the attack was less than two minutes with Muhammad firing a total of 16 shots. Dyer said he surrendered to a responding officer without incident and later apologized to the chief.
In addition to Tuesday’s killings, police said Muhammad was suspected in the fatal shooting of a security guard, also a white man, last week.
A Facebook profile page for a Kori Ali Muhammad from Fresno paid homage to black pride and black nationalism, with images of the red, green, and black Pan-African flag and a raised fist.
The rambling profile includes militant and apocalyptic language and repeated demands to “let black people go.” He referenced “white devils” and praised melanoma skin cancer.
On Saturday afternoon, Muhammad posted a photo of himself in a colorful garment, with his head covered, and the words: “LET BLACK PEOPLE GO OR THE DOOM INCREASES REPARATIONS & SEPARATION NOW.”
On Monday he wrote: “MY KILL RATE INCRESASES TREMENDOUSLY ON THE OTHER SIDE ASÈ ALLAH U AKBAR.”
Muhammad had run afoul of Fresno police before. He was indicted by a federal grand jury in February 2005 for possession of cocaine with intent to distribute, possession of a firearm for drug trafficking and possession of a firearm by a convicted felon, after a Fresno police officer searched his car and found two large bags of cocaine, a loaded handgun, and two rifles, court records show. He was deemed competent to stand trial in August 2006 and pleaded guilty to the charges of cocaine possession with intent to distribute and a weapons charge. He ultimately served 92 months in federal prison.
Kori Taylor’s shooting was overtly racial in intent, but even so, the controlled media’s coverage has been muted—in strong contrast, for example, to the shootings carried out by Dylan Roof, whose racial motivations in the June 2015 Charleston Church shooting incident were world headlines for months on end.
The overwhelming preponderance of black or nonwhite killers to white victims makes it clear that there is indeed a racial undertone to murder and other violent crime.
As pointed out in the New Century Foundation’s classic study, “The Color of Crime”—which drew all of its figures from published official government statistics—in 2013, of the approximately 660,000 crimes of interracial violence that involved blacks and whites, blacks were the perpetrators 85 percent of the time.
This means a black person was 27 times more likely to attack a white person than vice versa.
This imbalance holds for Hispanics as well, as a Hispanic was eight times more likely to attack a white person than vice versa.
In 2013, a black was six times more likely than a non-black to commit murder, and 12 times more likely to murder someone of another race than to be murdered by someone of another race.
In 2014 in New York City, a black was 31 times more likely than a white to be arrested for murder, and a Hispanic was 12.4 times more likely.
For the crime of “shooting”—defined as firing a bullet that hits someone—a black was 98.4 times more likely than a white to be arrested, and a Hispanic was 23.6 times more likely.
To put these statistics into their practical implications, the study continued, if New York City were all white, the murder rate would drop by 91 percent, the robbery rate by 81 percent, and the shootings rate by 97 percent.
Furthermore, in an all-white Chicago, murder would decline 90 percent, rape by 81 percent, and robbery by 90 percent.
The massive disparity in nonwhite on white murders is deliberately suppressed by the controlled media—and instead, the completely false narrative is trotted out to claim that white gunmen, and white policemen in particular, are remorselessly gunning down blacks left, right, and center.
As the government’s own figures show, the exact opposite is true: whites are far and away the victims of interracial violence, not the perpetrators.