You are here: Home All News
The Zentralrats der Juden in Deutschland (Central Council of German Jews, ZJD) has called for stronger action against the Alternative für Deutschland (AfD), saying that Jews need to align themselves to Muslims and Gypsies against Germans who vote for that party.
ZJD president Josef Schuster made the remarks at the Jewish Community Day (jüdischen Gemeindetag 2016) in Berlin. The ZJD is the official representative body of all Jews in Germany. 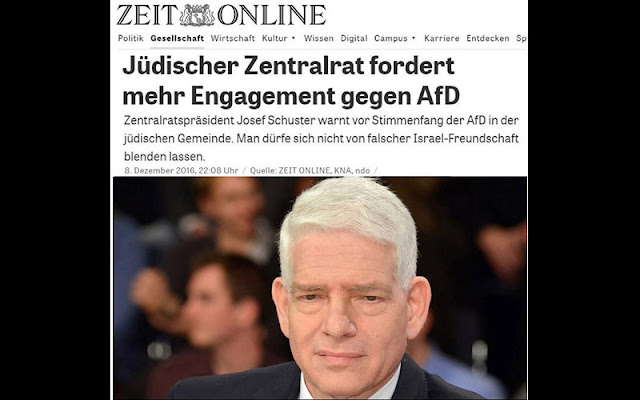 According to a report in Die Zeit newspaper, Schuster also warned against AfD attempts to woo the Jewish vote by “falsely claiming friendship with Israel.”
This was a reference to the fact that some AfD politicians have dared to point out that all they want is immigration and border control policies which Israel already has.
Schuster and the ZJD—like all Jewish lobbies in Europe and America—fanatically support Israel’s policies, but equally fanatically oppose those same policies when white people want to emulate them.
Speaking at the Gemeindetag function, Schuster called upon “all Jews to raise their voices against right-wing populism.” The AfD is “gaining popularity in Germany,” he said, adding that that “party is based on division and exclusion.”
This is, of course, extremist hypocrisy. The AfD’s policies are nothing like those which Schuster-supported Israel enforces.
The AfD has not said, for example, that it would never allow refugees—unlike Israel; that it would outlaw marriages between Jews and non-Jews—unlike Israel; that it would restrict immigration only to those who could prove that they were genetically the same as Germans—unlike Israel, which as a Jews-only immigration policy; and the AfD has never proposed the drafting of laws to steal other peoples’ land—unlike Israel, which has now illegally seized vast areas of the West Bank for illegal Jewish settlements.
“If feelings against Muslims or the so-called elites is generated, then sooner or later it is generated against Jews as well,” Schuster continued. “The Central Council of Jews has also always worked for the interests of other minorities such as Muslims or Sinti and Roma,” he added.
Schuster also attacked those who criticize Israel, saying that there was an increase in “unrestrained hate and injurious comments” about the Jewish ethnostate.
The German government was represented at the Gemeindetag by Federal Minister of Finance Wolfgang Schäuble (CDU), who said that “Israel’s right to exist is unchangeably part of the German state.”