At least 1.17 million Third World invaders pretending to be refugees—a population twice the size of Luxembourg—invaded Germany in 2015 and 2016, official figures released by the government have revealed. 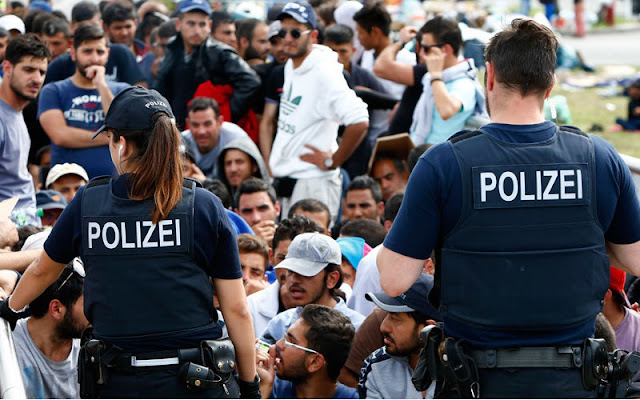 These figures are only for those who actually officially registered as “asylum seekers” and do not include the hundreds of thousands who moved on to parasite off other Western European nations or who just “vanished” into the increasing number of nonwhite ghettos springing up in major urban areas across the Continent.
According to figures released by the Office of Migration and Refugees (BAMF) and announced in person by Interior Minister Thomas de Maziere, the 1.17 million invaders were made up of 890,000 in 2015, and 280,000 in 2016.
De Maziere falsely attributed the decline from 2015 to 2016 as being due to measures “taken by Germany” to slow the invasion, and in particular named the European Union’s failed “agreement” with Turkey to supposedly stop the flow.
In reality, it was the unilateral—and condemned by Germany and the EU—moves by Balkan states such as Serbia and the Visegrad 4 nations under Hungary’s leadership which closed off the “Balkans route” which slowed down the invasion.
De Maziere also revealed that the number of “asylum seekers” who made their applications during 2016 was more than 745,000, about 269,000 more than in 2015.
The reason for this, he said, was because many who had arrived in Germany during 2015 “could not immediately apply for asylum due to overwhelmed immigration authorities.”
Now, however, he said, the “mountain of pending applications has been worn down.”
The largest group of asylum seekers to apply were those claiming to be Syrians, who made up one-third of applications, following by Afghans (17 percent), and Iraqis (13 percent).
However, given the large number of fake identity documents and passports in circulation, even these figures are likely to be inaccurate.
Of all the “asylum applications” decided upon during 2016, some 62 percent—or about 434,000 cases—were decided “favorably”—that is, given the right to stay in Germany.
Currently, a further 430,000 “asylum” applications were still under consideration as of the end of 2016.
The figures mean that of the 2.313,710 Third World invaders who landed in Europe during the 2015/2016 year, Germany took in just under half, and the rest were distributed around the rest of Europe.