The chaos which has enveloped Germany following the Angela Merkel-created mass Third World invasion has been revealed with the news that 20 percent of all the fakers claiming to be refugees in the state of Brandenburg have “gone underground,” and can no longer be found. 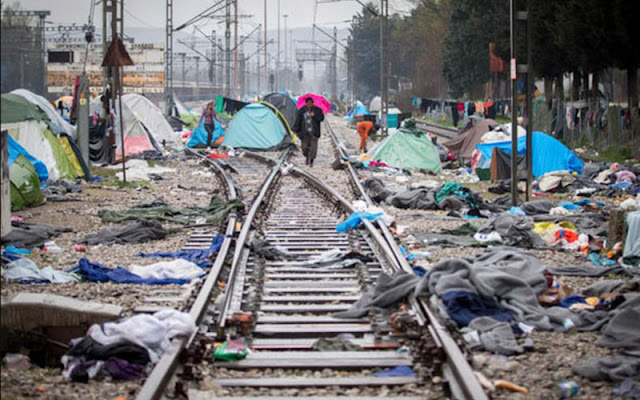 According to a report in Die Welt newspaper, state authorities in Brandenburg “are looking for thousands of refugees” whose “whereabouts are unknown.”
Most of the nonwhite invaders entered Brandenburg via Hungary and Austria during 2015, but their current whereabouts are unclear, admitted the state’s Deputy Interior Ministry spokesman Wolfgang Brandt.
According to the report, the state prosecutor’s office has been forced to launch thousands of individual investigations to try and determine the location of these “vanished” invaders.
Of the 1,000 individual cases inspected so far, at least 20 percent have “obviously gone underground,” Frankfurt senior state Prosecutor Ulrich Scherding was quoted as saying.
Brandenburg state’s Socialist Party of Germany (SPD) Interior Minister Karl-Heinz Schröter freely admitted that it was “well known that many people who came to Germany at the height of the refugee movement later disappeared off the radar,” but “now authorities are equipped with fingerprint storage technology.”
Schröter was referring to the fact that when the mass invasion first started in 2015, Brandenburg state did not even fingerprint invaders claiming to be refugees but just admitted all who presented themselves for the welfare handouts.
This practice was common throughout Germany, so it is likely that the 20 percent “missing” invader rate is replicated throughout the country—potentially meaning that tens of thousands, and possibly over 100,000, invaders have just “vanished” since 2015.
Meanwhile, the state of North Rhine Westphalia—under the control of a coalition between the SPD and the Green Party—has announced that all Afghan “refugees” living in that state will not be handed over to the central government for deportation, even though the Merkel government has declared Afghanistan to be a “safe” country.
The state of Schleswig-Holstein, also under the control of a SPD-Green coalition, had earlier announced that it would also not be handing over any of its Afghans for deportation by the central government.
According to an earlier interview with Jutta Cordt, the newly-appointed head of the Federal Office for Migration and Refugees (BAMF), there “are areas in Afghanistan that are considered relatively safe. There are domestic escape alternatives,” she said, referring to the fact that it was not necessary for Afghans to “flee” their country at all, and that all who claim to do so are lying.