A Green-Communist coalition in Germany’s Upper House has prevented that country’s government from adding North African states to its list of “safe” countries—thereby preventing the deportation of invader fake-refugees from those states. 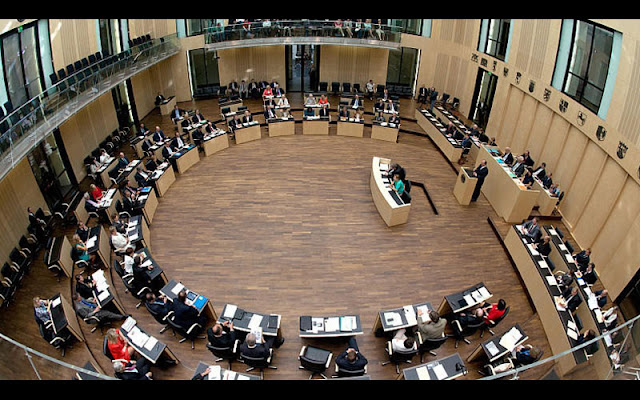 According to a statement released on the Upper House’s (Bundesrat) website, that body has “denied consent to the law on the classification of Algeria, Morocco, and Tunisia as safe countries of origin.”
The required absolute majority of 35 votes was not reached during the vote and thus the law cannot be enforced, the statement said.
The Bundesrat represents the sixteen Länder (federated states) of Germany at the national level, and its members are nominated by the state governments and fulfill a role similar to the U.S. or Canadian Senates, or Britain’s House of Lords.
The Bundesrat has to pass proposed legislation with an absolute majority, and in this particular case, representatives from the Green Party teamed up with those from Die Linke (“The left”—the renamed former ruling Communist Party of East Germany) to deny the government the requisite majority.
The only option open to the Federal Government or the Bundestag (the lower house) is now to call the “mediation committee” to negotiate an agreement on the law, the statement added.
According to the Budesrat statement, “safe countries” are the countries of origin “where there is a legal presumption due to the general political situation that there is neither political persecution nor inhuman or degrading punishment or treatment.”
Asylum applications from people from these countries of origin are generally rejected as manifestly unfounded, unless special circumstances speak against them.
The proposed designation for Algeria, Tunisia, and Morocco was aimed to make it easier for Germany to deny “asylum requests” from their citizens on the grounds that they were safe in their home countries.
The designation, which presumes a government does not systematically persecute opponents, would also aim to deter citizens of the three Maghreb countries from illegally heading to the EU in the future.
But the “safe countries” plan was rejected by the Green-Communist alliance, who said that there was “concern over the rights records of those countries, including on the treatment of homosexuals.”
Interior Minister Thomas de Maiziere said the decision marked “a bad day in our efforts to stop illegal immigration.”
De Maiziere added that the decision was caused by “party politics” ahead of September elections.
The interior minister of the conservative southern state of Bavaria, Joachim Herrmann, branded the vote “an entirely wrong signal.”
“We have to be in a position to quickly and easily reject asylum requests that are not based on political persecution but purely on economic reasons,” he was quoted as saying by news agency DPA.