Only 11 percent of the 430,000 “asylum” applications currently being processed by the German Federal Office for Migration (BAMF) relate to “Syrians,” and Third World invaders are still pouring into Germany at the rate of over 11,000 per month, the new head of that organization has admitted. 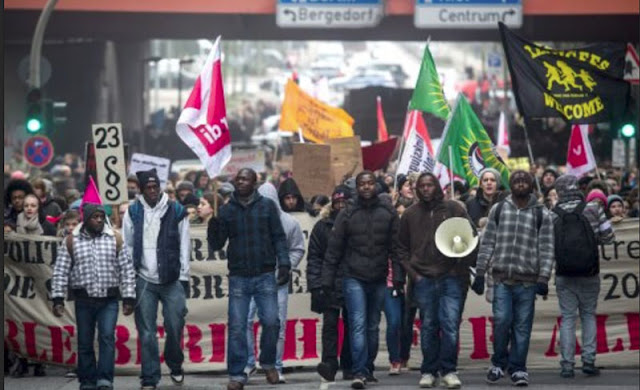 Speaking in an interview with the Focus news service, new BAMF president Jutta Cordt said that of the “430,000 asylum procedures” currently being processed, only “50,000 of them are related to Syrians” and of the remaining, “338,000 cases are considered to be complicated.”
She also revealed that a total of 2,807 new invaders pretending to be refugees had registered with the BAMF in the first week of January 2017 alone. This means that the Third Worlders are still pouring into Germany at the rate of at least 11,000 per month.
According to Cordt, there were officially some 745,545 “asylum applications” made in Germany in 2016—but this figure does not reflect the true total as there is a backlog in registering the applications.
Cordt said that in 2017, the government expected that at least 2.7 million Africans would flee “regional terrorist groups, corrupt governments, droughts, and natural catastrophes” and that many experts “believe that they are on their way to Europe, and Germany in particular.”
Asked how many “refugees” she was expecting to come to Germany in 2017, Cordt answered that there were too “many variables” to make any accurate predictions.
She did say, however, that there was “no upper limit” to the number of “asylum applications” Germany would take, because “anyone who applies for asylum in our country has the right to have their application considered.”
In a separate Focus interview, William Swing, Director General of the United Nations’ International Organization for Migration, said that his organization estimated that worldwide, at least 65 million people were “refugees” of some sort.
Most of these are Africans, and their goal is Europe, he said. “It is migration from pure despair,” said Swing. “The price of dying in flight is classified as less than staying.”
In reality, Africa is one of the most mineral rich and agriculturally perfect continents on earth, and the African inability to prosper or create wealth there is simply a by-product of the extremely low IQ of the inhabitants of that region.
All scientific studies show that Africans have, as a group, the lowest IQs on earth. Mozambique, for example, has an average IQ of between 59 and 67, as does Gabon, Equatorial Guinea, Cameroon, Liberia, Guinea, Guinea Bissau, and Gambia.
South Africa, Botswana, Namibia, Angola, Tanzania, Somalia, Ethiopia, Sudan, the Central African Republic, Chad, Niger, Benin, Ghana, the Ivory Coast, Burkina Faso, and Mali, all have average IQs of between 67 and 74, while the “top” sub-Saharan African IQ scores—of between 74 and 83—are seen in Sierra Leone, Nigeria, and Uganda.
It is clear that importing millions of individuals with IQs this low is not going to “economically boost” Europe, but merely drag it down to the level of the Third World.