You are here: Home Europe
The Greek Minister for Migration, Yannis Mouzalas, has finally admitted in public that the vast majority of Third World invaders pouring into Europe via his country are not refugees, but “economic migrants.” In reality, of course, none of the invaders are actually “refugees” at all, as they all have come from safe third countries.
Mouzalas—a member of the crypto-Communist Greek government—admitted late last week that “people entering the country illegally from Turkey are not predominantly from war-torn countries like Syria and Iraq. They are no longer refugees, but economic migrants.” 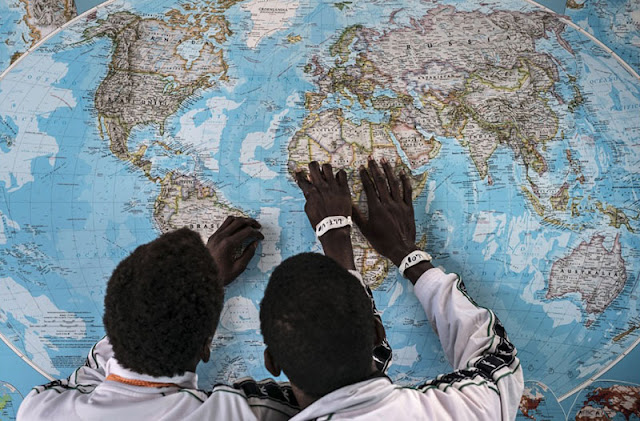 At least 60,000 nonwhite invaders are trapped in Greece after some Eastern European states under the leadership of Hungary erected fences and deployed troops to halt the invasion.
Most of the 60,000 invaders in Greece now live in government-provided camps where they are housed, fed, and clothed by the already hard-pressed Greek taxpayers, subsidized by the European Union (EU).
To add to Greece’s problems, the Angela Merkel regime in Berlin has engaged in yet another hypocritical policy flip, announcing that as from March, “refugees” who first landed in Greece will be sent back to that country.
The so-called “Dublin Agreement” on “asylum seekers” always said that those seeking asylum had to apply in the first EU state in which they landed.
This policy was always applied until 2015, when Merkel announced that she was unilaterally abandoning it and would offer “asylum” to any Third World invader who managed to reach Germany.
Now, however, with elections coming up, and a dramatic rise in support for the Alternative für Deutschland (AfD) party, Merkel has decided that the Dublin Agreement rules should once again apply.
A German Interior Ministry spokesman, Tobias Plate, was quoted by the media as saying that Germany would reinstate the Dublin rule and return newly arrived “asylum seekers” to their first EU port of call.
Mouzalas condemned the announcement by saying that the Dublin Agreement is “unable to respond to the historic migration flows and leaves the burden to the member states that migrants first arrive in.”
Of course, neither Mouzalas or the Merkel regime want to admit that even under the EU’s absurd “asylum” rules, none of the millions of Third World invaders who have poured into Europe over the last few years qualify as “asylum seekers.”
Even those who might genuinely have fled war zones—such as Syria or Iraq—have all either refused to move to other, completely safe, parts of their own country, or have passed through multiple safe countries on their way to Europe.
All of the accepted definitions of asylum state that an asylum seeker must be fleeing out of a well-grounded “fear of his or her life.”
All of the invaders reaching Europe have left safe third countries, and therefore, not a single one is actually a refugee at all. They are, without exception, scroungers seeking to parasite off the European taxpayers.