You are here: Home All News
The rush of Haitian invaders pretending to be “asylum seekers” pouring into Canada from the U.S.—after realizing that their claim to “refugee” status is so bogus that they stand no chance of recognition—has now reached between 400 and 600 per day. 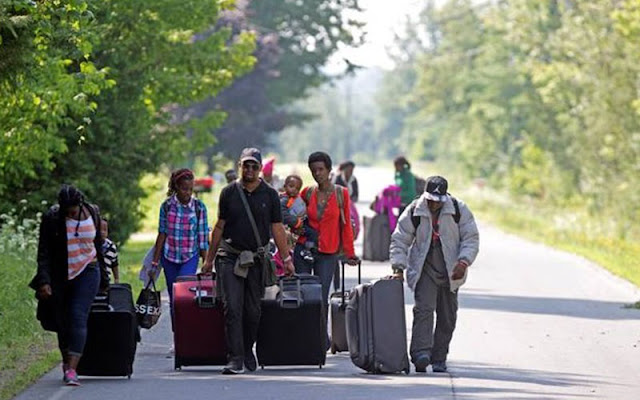 According to a report in the Globe and Mail, the border crossing at Saint-Bernard-de-Lacolle, about 37 miles south of Montreal, was running near capacity as it processed up to 150 asylum seekers every day.
That number is now reaching between 400 to 600 on many days, according to Jean-Pierre Fortin, national president of the Customs and Immigration Union, meaning a backlog is building as many arrivals once processed in a few hours now must now wait a few days.
Fortin said 15 to 20 border agents have been brought in from across the country to bolster the Lacolle roster of about 90 agents who operate the post 24 hours a day, seven days a week.
Agents are also working all the overtime they can handle, he said, but there are other logistical hurdles to processing more people.
“It’s not just a matter of human resources; we don’t have enough computers,” he said. “The building in Lacolle was not built to handle 500 people.”
Fortin, who is in regular contact with agents and visited this week, said the Lacolle office ordered 900 breakfasts Tuesday from a catering company to feed the invaders waiting at the post and others coming in from the Roxham Road informal crossing where most of the fake asylum seekers have walked into Canada.
Once the border crossers are processed at Lacolle, they will leave the tent village and take a chartered bus to Montreal. Officials there said they are housing 2,620 people at the usual YMCA dormitory and several temporary sites including Olympic Stadium. The officials announced a mothballed hospital, the Royal Victoria, will be used to house hundreds more.
Francine Dupuis of Montreal’s refugee settlement agency said 1,650 “asylum seekers” were received in July, nearly 10 times the number one year earlier. “The situation is under control, but obviously it’s highly unusual,” Ms. Dupuis said.
Meanwhile, the Haitian government’s ministers of foreign affairs and “Haitians living abroad” have come to Montreal to “support” their nation’s bogus asylum seekers.
Foreign Affairs Minister Antonio Rodrigue and Stéphanie Auguste, minister for nationals living abroad, touched down in Montreal on Tuesday this week.
At an afternoon news conference with Montreal Mayor Denis Coderre, the ministers said the Haitian government “felt a responsibility to lend support to citizens migrating to Canada.”
Rodrigue said they are on a “fact-finding mission” to learn about the Haitians who came to Canada, and to see what kind of agreement can be reached with the Canadian government.
And the pair wants “to show them that the Haitian people and government are with them, behind them and don’t forget about them,” he said.
They will also help Haitians without identification get the documents they need in order to access essential services, such as passports and birth certificates, said Auguste.
Rodrigue acknowledged it would be a strain on resources in Haiti if a large number of nationals were to return, but that “it’s their country, if they have to go back, we have to receive them,” he said. “They are our brothers and sisters.”