Dutch populist politician Geert Wilders—currently the front-runner in opinion polls in the Netherlands March 2017 general election—has announced a hardline anti-Third World invasion election platform which includes “zero asylum,” the de-Islamizing of the Netherlands,” the revoking of all “asylum” grants, the banning of all immigration from Muslim nations, and withdrawing from the European Union. 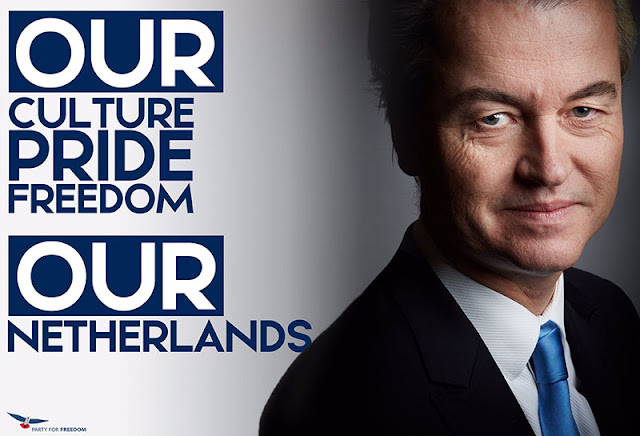 The election platform, published on the website of his Freedom Party (PVV) website, says that Wilders will close Holland’s borders, revoke all existing “asylum” residence permits, close all invader centers, ban Islamic head veils, denaturalize all criminal invaders with dual nationality, refuse to let ISIS supporters who had fought in Syria back into the country, close all mosques and Islamic schools, leave the E.U., institute a system of binding citizens’ referenda, cancel all public funding for “foreign aid,” and lower taxation as state expenditure drops.
The hardline policy has provoked a storm of protest from all the other parties in the Netherlands, who have called for a “cordon sanitaire” around the PVV to try and prevent it from taking part in a coalition government.
The Dutch parliament is elected by a proportional representation system, and is always highly fractured. Generally, though, any party which gains more than 30 of the 150 parliamentary seats forms the government in coalition with its closest ideological neighbors.
Currently, opinion polls say that Wilders’s PVV is on course to emerge from the election with around 30 seats, and is set to become the single largest party in the new parliament.
During a recent television interview with Dutch broadcaster WNL, Wilders predicted a government role for the PVV in spite of all other parties vowing not to work with him.
Wilders said that all the other parties would “soon forget” their pledges not to work with him. “In the first place, they’ll have to [abandon their pledges],” he said. “You can’t just shove two and a half million people aside after democratic elections, that would be very ill-advised.”
On Twitter, Wilders added that there would be a non-violent “revolt” if the PVV was sidelined, and pointed out that an alternative left-right coalition would have to encompass five or more parties.
“This will prove unworkable, and that kind of coalition would be so unstable that not only will it not serve the country, but it will be lying on its ass within a year, to put it crudely,” Wilders said.
During the interview, Wilders was asked about his unusually brief manifesto, and said that he was “not going to promise voters anything apart from this: We will make the Netherlands ours again; we will close the borders.”
In addition, he said, “all that money we send abroad—to Africa, to Brussels, to Greece, to asylum seekers in the Netherlands”—will go to the Dutch people instead. Finally, he told the shell-shocked interviewer, that the Netherlands does not need to build a Trump-style wall to keep out foreigners but merely has to re-establish border controls.
A new campaign video issued by the PVV highlighted his new campaign slogan: “The Netherlands is ours again,” and referenced both Brexit and Donald Trump’s election victory in America as examples to be followed.
“How long are we still going to be in charge in our own country?” Wilders asks in the video.
“The [immigration] sluices are wide open. We have to close our borders. Before the end of this century, Africa’s population is going to increase from one to four billion people, and many of them want to come here.
“Only if you go to the polling booth and vote, can the Netherlands be ours once again.”