You are here: Home All News
All of an estimated 40,000 Rohingya Muslims living in India are illegal immigrants, even those registered with the UN refugee agency, and the government aims to deport them, Union Minister of State for Home Affairs Kiren Rijiju has said. 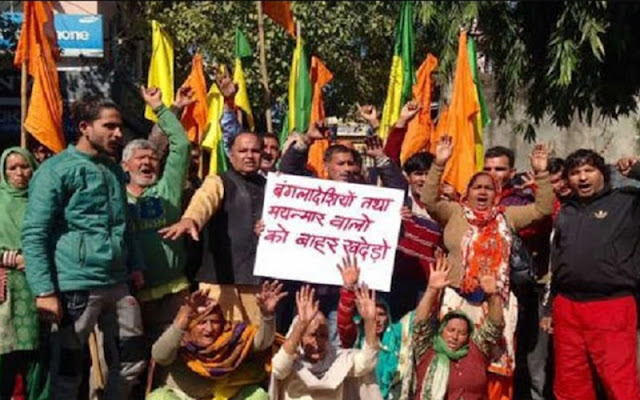 Anti-Rohingya protests in Jammu, northern India, February 2017.
According to a report in the Hindi newspaper in India, Rijiju told Parliament that the Central government had directed State authorities to identify and deport illegal immigrants, including Rohingyas, who have entered Indai from Burma (now called Myanmar).
The United Nations High Commissioner for Refugees (UNHCR) has issued identity cards to about 16,500 Rohingyas in India that it says help them “prevent harassment, arbitrary arrests, detention and deportation”.
But Rijiju said in an interview on the weekend that the UNHCR registration was irrelevant.
“They are doing it, we can’t stop them from registering. But we are not signatory to the accord on refugees,” he said.
“As far as we are concerned, they are all illegal immigrants. They have no basis to live here. Anybody who is an illegal migrant will be deported,” Rijiju added.
Hundreds of thousands of Rohingyas have fled Myanmar, claiming that they are persecuted in majority Buddhist Burma.
Their behavior in India has bene less than exemplary, and they have been implicated in a large number of crimes and other illegal activities, leading to a string of anti-Rohingya protests.
Rijiju declined to comment on the deportation process, even as some human rights activists questioned the practicality of expelling thousands of people scattered across the country.
“There’s a procedure, there is a rule of law. We can’t throw them out just like that. We can’t dump them in the Bay of Bengal,” Rijiju said.
India said it was in talks with Bangladesh and Myanmar about the deportation plan. But deportation is likely to be difficult, given Myanmar’s position that all Rohingyas need to be scrutinized before they can be allowed back in as citizens.