The Hungarian government has deployed the first of a proposed 3,000-strong “border hunter” force to back up existing police and army patrols securing that nation’s borders against the Third World invasion. 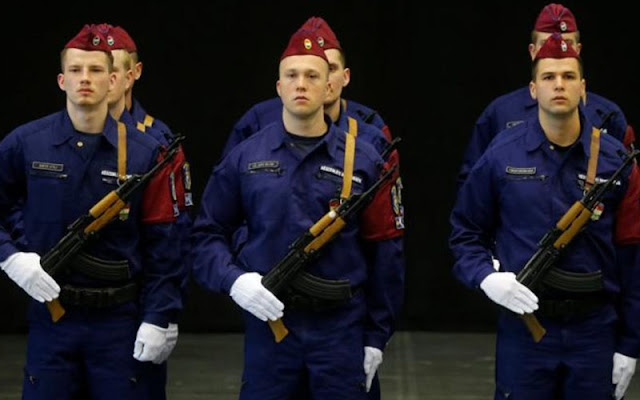 According to a Reuters report, the auxiliaries are being deployed after a six month intensive training course, and are being recruited with salaries well above the national average.
Hungarian Prime Minister Viktor Orban, who at a swearing-in ceremony of border hunters last week described the flood of Muslims pretending to be refugees as a “Trojan horse for terrorism,” has warned that a new wave of invaders entering Europe via the Balkans route is on the way.
“Hungary had to act to defend itself. The storm has not died; it has only subsided temporarily,” he said. “There are still millions waiting to set out on their journey in the hope of a better life (in Europe).”
The training of the new border force is being carried out at Barcs, a border crossing with Croatia. Barcs was where hundreds of thousands of nonwhite invaders flooded into Hungary after having passed through Croatia from Serbia.
Barcs is now quiet, the result of Hungary’s extensive border building plans on its own borders and its help to neighboring Croatia and Serbia in reinforcing their borders.
Recruits for the new border force must be between 18 and 55 years old, and able to undergo training similar to police and learn other skills such as guarding a border fence, detaining large groups of invaders and tracking their paths.
Like police officers, border hunters will carry pistols with live ammunition, batons, pepper spray, and handcuffs, and will also be equipped with night-vision goggles if needed.
“The defense of Hungary is the most important for us,” one recruit, Adrienn Heronyanyi, 23, told Reuters.
Asked under what conditions border hunters could use force against migrants, regional police chief Attila Piros told Reuters that the rules were the same as for police, namely to “break resistance” but only as a last resort.
In addition, the Hungarian parliament passed a law allowing for the detention of all invaders in camps along its border. The measure has provoked hysterical opposition from all pro-invasion bodies such as the United Nations and the European Union.