Hungarian Prime Minister Viktor Orbán has announced that Hungary will start accepting “refugees: Germans, Dutch, French and Italians, terrified politicians and journalists who here in Hungary want to find the Europe they have lost in their homelands.” 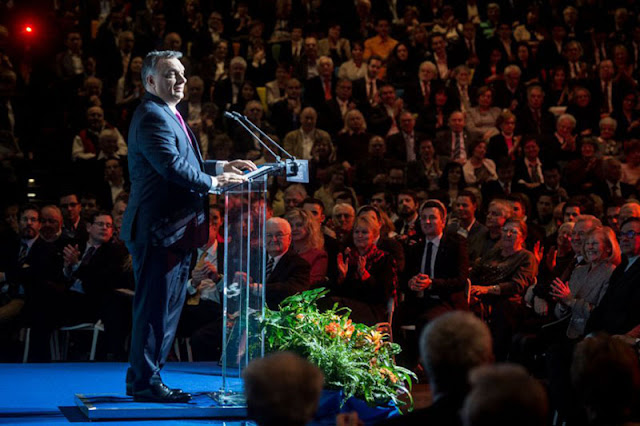 Speaking during his annual state of the nation address delivered at the Castle Garden Bazaar in Budapest at the end of last week, Orbán announced that his nation would have to defend itself against several major attacks which were on the way.
Migration, Orbán said, will “remain on the agenda” because “despite the bloody reality and the terrible facts, migrants can still move around Europe without restrictions.”
Orbán also said it would be “necessary to take up arms against increasingly strong activists from international organizations, and against covert foreign attempts to exert influence.”
This is the work of paid activists from international organizations and their offices in Hungary, he said, adding that “[h]ere there are large predators swimming in the water, and this is the transnational empire of George Soros.”
Despite the will of the people declared last autumn in Hungary’s quota referendum, the international financier’s organizations “are working to bring hundreds of thousands of migrants into Europe,” he said.
Despite the fact that the former government of the United States, Brussels, “and even Berlin” proclaimed that the migrants must not be stopped, the Hungarian government resisted: it built a fence and stopped them, thus protecting Hungary and “with it Europe also.”
“Of course,” Orbán said, “we shall let in true refugees: Germans, Dutch, French and Italians, terrified politicians and journalists who here in Hungary want to find the Europe they have lost in their homelands.”
Orbán cited Brexit, the U.S. presidential election, the “ejection” of the Italian government, and the Hungarian quota referendum as examples of the fact that in many places people had had enough of “arrogance and condescension,” and the forced imposition of utopian ideals.
He said that in Europe over the past year there has been an uprising of those whose voices had been silenced and whose “mouths had been gagged” in the name of political correctness.
From an economic perspective, Orbán described Soros’s “open society” as follows: “The foxes are let into the henhouse to freely compete, and nobody can stop the foxes winning — time after time.” If, in the end, he added, the “poor, slowly-awakening citizens” resist, they are flooded with millions of migrants, who have different religions and customs.”
“This is how the world’s most bizarre coalition of people smugglers, human rights activists and elite European politicians came into existence, specifically to deliberately bring millions of migrants into Europe,” he said.
The “lords of globalist politics” have not given up, however, and have proclaimed that if somewhere an election is not won by liberals, then in that place democracy no longer exists.
They have proclaimed that “the people are a danger to democracy,” he said, and suddenly “those who previously feared hysterically for press freedom” are now demanding restrictions on the media and the Internet. “If someone finds Hungary’s ‘royal’ public television insufficiently neutral, they should switch to an American channel occasionally; it will be a relief to switch back,” he said.