The Hungarian government has refused to “compensate” two Bangladeshi invaders—as ordered by the European Court of Human Rights because they were detained while illegally crossing the Hungarian border in 2015. 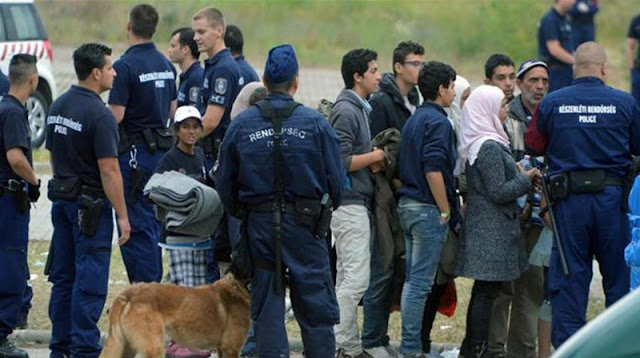 Earlier, the court had ordered the Hungarian government to pay two Bangladeshi invaders pretending to be refugees €10,000 euros ($10,772 dollars) each in “compensation” because they had been detained for three weeks and then expelled back into Serbia in 2015.
Speaking on national radio, Hungarian Prime Minister Viktor Orban dismissed the court ruling, saying that the “whole thing is absurd and incomprehensible. A country is being fined for following its own laws.”
Orban said the verdict supported “smugglers, Brussels [EU] bureaucrats, and foreign-funded organizations,” which referred to the Hungarian branch of the Soros-funded “Helsinki Committee for human rights” which legally represented the Bangladeshi asylum seekers at the court in Strasbourg.
The court case was made after the two invaders—claiming to be fleeing from a country where there is no war—were kept in a transit zone on the Hungarian border with Serbia while their cases were examined.

The Bangladeshis, Ilias Ilias and Ali Ahmed, filed a suit against Hungary in September 2015, shortly after the government put up an anti-invasion fence on its southern borders and created two transit zones for the flood of fake asylum seekers as part of its strategy to halt the Balkans route nonwhite invasion of Europe.
The two fakers sought to be released from the transit zone and asked for their expulsion to Serbia to be halted.
The court ruled last week that their detention in the transit zone was “unlawful under the European Convention of Human Rights,” but there was “no violation of the convention in respect of the conditions of detention at the transit zone.”
A court statement said that only one man was given an information leaflet, but that was useless, since he was illiterate.
The decision came as the Hungarian government passed legislation which will keep all invaders applying for “asylum” in Hungary until their requests are processed. Those not applying for asylum in Hungary are immediately deported back into Serbia.
In this way, Hungary can still adhere to the letter of the law of its EU-mandated “asylum” policy, and even apply the actual rules of granting asylum—which state that an applicant must be fleeing in fear of his or her life.
Of course, all of the invaders have crossed many “safe” countries before reaching Hungary, and therefore none are actually fleeing “in fear of their lives,” and almost all get rejected in any event.
The U.N. refugee agency UNHCR said last week that the number of asylum applications in Hungary reached 177,000 in 2015. It fell sharply to 29,000 last year, with just 912 in the first two months of 2017.