You are here: Home All News
The rush of nonwhite invaders pouring into Canada are under the mistaken impression—which has been deliberately created—that they will all qualify for asylum in that country, but this is not the case, a fact which has become clear from recent comments made by Montreal  Premier  Philippe Couillard. 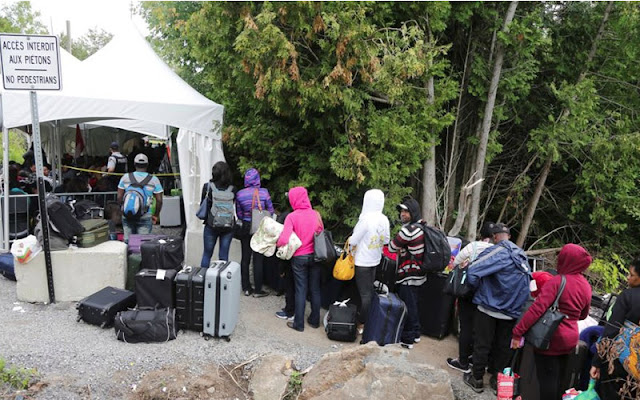 Addressing Canadian media over the weekend, Couillard said he felt “it necessary to clarify there is no guarantee people trying to get into Canada will be accepted.”
Without naming Prime Minister Justin Trudeau and Montreal Mayor Denis Coderre directly for saying on Twitter refugees can count on Canada creating the impression the doors are wide open, Couillard said he felt the need to correct certain perceptions.
“Yes, we are a society with a compassionate, welcoming tradition that we are proud of, but we are also a society that believes in the rule of law and fairness,” Couillard told reporters Saturday.
“This (obtaining asylum status) is very demanding, and difficult and success is far from guaranteed.”
The resultant uproar caused Couillard to issue a second, longer statement, on his Facebook page, which said that the nonwhites pouring into Canada are “asylum seekers” who are “governed by very well-defined laws and procedures, under the responsibility of the federal authorities, with which our government collaborates for the provision of certain services until they have decided on the asylum applications submitted by these authorities.”

“Today, these people are mainly of Haitian origin, but it must be expected that nationals of other countries will proceed, or will proceed, in the same way in the coming months. This will not be unique in Quebec, other provinces are facing—or will face the same challenge.”
“We are very aware that this is a very delicate situation, especially on the human level. It is unfortunate that these very vulnerable people were convinced that admission as a refugee in Canada and at home in Quebec would be simple, even automatic. It is not so. There is no guarantee that asylum applications will be accepted, given the strict rules that govern them.”