You are here: Home All News
At least 30,665 Third World invaders pretending to be refugees have landed in Europe from January 1 to April 5, 2017—a dramatic increase over the first two months of the year, when “only” 17,477 had made it across the Mediterranean Sea. 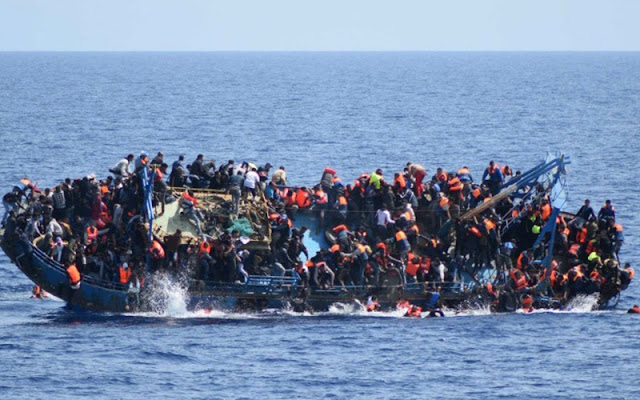 According to the latest figures issued by the United Nations’ International Organization for Migration (IOM), the main nationalities of the invaders were, in descendant order:
To Italy: Ivory Coast, Guinea, Nigeria, Senegal, and Gambia.
To Greece: Syria, Algeria, Republic of Congo, Iraq, and Kuwait.
To Bulgaria: Afghanistan, Syria, Iran, Pakistan, and Iraq.
The IOM update also reported that only 8 invaders were registered in Hungary for the period March 30 to April 5—another indication that the Hungarian government’s crackdown on the Third World invasion is successful and that it is easily possible to stop the nonwhite invasion through firm measures.
At the same time, the IOM announced that it had “assisted” 170 Gambians “stranded in Libya” return home—a de facto admission by the U.N. body that there is in fact no justification for any of the Third Worlders to be lodging fake asylum claims in Europe.
According to the IOM statement, that organization chartered an aircraft from Tripoli’s Mitiga airport back to Banjul, the capital of Gambia.
“IOM also provided pre-departure interviews, medical check-ups and facilitated exit visas for the passengers. Prior to departure the migrants also received further assistance, including non-food items,” the IOM statement said.
“In addition, the passengers aboard the Gambia flight included four medical cases, including one mental health case, all of whom were accompanied by one IOM medical and one operational escort to ensure their safety during the flight.”
The IOM also provided cash grants to 25 of the Gambians for “reintegration support in Gambia.” The aim of this “reintegration assistance” is to provide the nonwhites with “an opportunity to start fresh once home by, for example, opening a small business or to continue their education.”

The return assistance was funded by taxpayers from the Netherlands, and forms part of the IOM’s “return assistance program” which has already shipped 1,965 invaders from Libya back to their countries of origin.