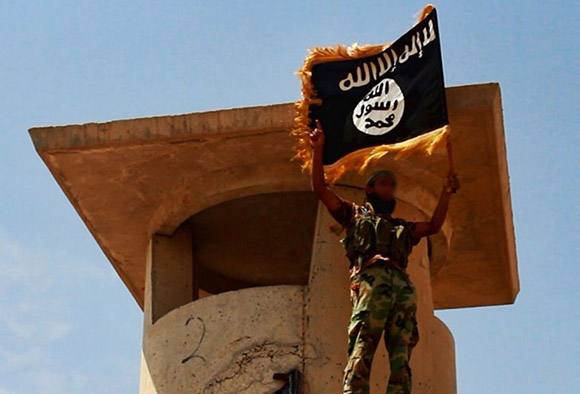 Ever since the invasion of Iraq—done under the utterly false claims that Saddam Hussein was involved in the 9-11 attacks and that he possessed “weapons of mass destruction”—in 2003, it has been inevitable that the state would split into Sunni and Shiite—and ethnic (Kurdish)—divisions. It was only the secular dictatorship of Hussein which had kept the state stable.
Ultimately, both Tony Blair and George W Bush bear responsibility for launching that war. Under normal circumstances, they should have faced trial at the International Criminal Court for war crimes, specifically “waging aggressive war” against a nation which presented no threat.
However, they have not—and probably never will—even face arrest, because they were only acting on behalf of the international Jewish lobby which engineered the entire conflict.
Proof of this was most recently revealed by America’s famous journalist, Carl Bernstein, who first sprang to prominence as the exposer of the Watergate scandal which brought down former president Richard Nixon.
Bernstein, himself Jewish, speaking in the Joe Scarborough show on NBC during a debate over the Bush legacy, openly stated that “Jewish neocons” (neoconservatives) were behind the war against Iraq.
The full video can be seen below, and the transcript reads as follows:
BERNSTEIN: This was an insane war that brought us low economically, morally. We went to war against a guy who had absolutely nothing to do with 9/11. It was a total pretext! It’s inexplicable and there you go to Cheney, there you go to Bush, there you go to the Jewish neocons who wanted to remake the world. Maybe I can say that because I’m Jewish.  To bring about a certain result—
SCARBOROUGH: I’m not really certain you can.
BERNSTEIN: OK.
SCARBOROUGH: I’m not really sure that you can.
BERNSTEIN: Go ahead.
SCARBOROUGH: It would be much worse if a Southern Baptist said that.
These Jewish neocons to whom Bernstein referred were—and still are—a group of Jewish Supremacists who did indeed manipulate the Bush administration into going to war against Iraq.
Origin of the Jewish Neocon Plan to Destroy Iraq
The Jewish neocon David Wurmser, when working for an Israeli think tank, The Institute for Advanced Strategic and Political Studies (IASPS), prepared a paper in 1996 in which the destruction of Iraq was first mooted as being vital for Israel’s interests.
The paper, titled “A Clean Break: A New Strategy for Securing the Realm,”  was delivered to a IASPS conference held in July of that year.
The paper, which can be found here, states in its introduction that the “main substantive ideas in this paper emerge from a discussion in which prominent opinion makers, including Richard Perle, James Colbert, Charles Fairbanks, Jr., Douglas Feith, Robert Loewenberg, David Wurmser, and Meyrav Wurmser” participated.
This paper, prepared seven years before the Iraq war, said that the Israeli-Palestinian peace process was leading to a forfeiture of Israel’s “strategic initiative” and that the
“loss of national critical mass was illustrated best by Israel’s efforts to draw in the United States to sell unpopular policies domestically . . . Israel has the opportunity to make a clean break; to secure the nation’s streets and borders in the immediate future, Israel can:
Work closely with Turkey and Jordan to contain, destabilize, and roll-back some of its most dangerous threats.
Forge a new basis for relations with the United States—stressing self-reliance, maturity, strategic cooperation on areas of mutual concern, and furthering values inherent to the West.
Israel can shape its strategic environment, in cooperation with Turkey and Jordan, by weakening, containing, and even rolling back Syria.
This effort can focus on removing Saddam Hussein from power in Iraq—an important Israeli strategic objective in its own right—as a means of foiling Syria’s regional ambitions.
“Since Iraq’s future could affect the strategic balance in the Middle East profoundly, it would be understandable that Israel has an interest in supporting the Hashemites in their efforts to redefine Iraq . . .  Were the Hashemites to control Iraq, they could use their influence over Najf to help Israel wean the south Lebanese Shia away from Hezbollah, Iran, and Syria.”
In other words, it became an openly declared policy goal by Israel to destroy Iraq, and, ultimately Syria as well, simply because they were opposed to the Zionist state. 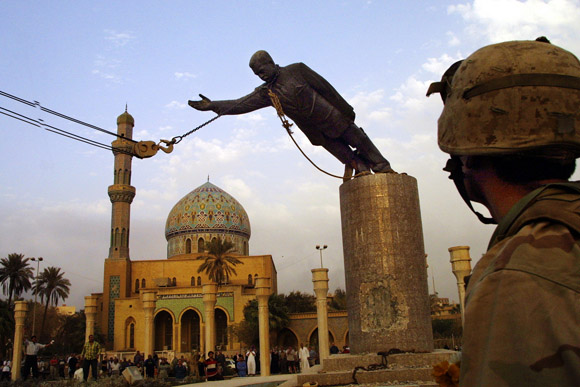 Jewish Neocons in the Bush Administration
The IASPS conference study group leader was a Jewish neocon named Richard Perle, who attended as a delegate from the  American Enterprise Institute; while another Jewish neocon named Douglas Feith attended as a representative of Feith and Zell Associates.
Both these individuals then emerged as key players in the Bush administration: Perle was Chairman of George Bush’s Defense Policy Board Advisory Committee, and Feith became Under Secretary of Defense and the Pentagon’s Policy Advisor.
They were joined by a long list of similarly Israel-first Jewish neocons in the Bush administration:
* Paul Wolfowitz, Deputy Defense Secretary and campaign advisor;
* Robert Satloff, US National Security Council Advisor;
* Rabbi Dov Zekheim, Under Secretary of Defense and Comptroller;
* Elliott Abrams, National Security Council Advisor;
* Marc Grossman, Under Secretary of State for Political Affairs;
* Richard Haass, Director of Policy Planning at the State Department and Director of National Security Programs;
* Henry Kissinger, former Secretary of State, a Pentagon advisor who sat on the Pentagon’s Defense Policy Board;
* James Schlesinger, another Pentagon advisor who also sat on the Pentagon’s Defense Policy Board;
* Robert Zoellick, the US’s Trade Representative;
* Mel Sembler, President of the Export-Import Bank of the United States;
* Israeli citizen Ari Fleischer, official White House spokesman;
* Joshua Bolten, Bush’s Chief Policy Director;
* Steve Goldsmith, Senior Advisor to the President and domestic policy advisor;
* Mark Weinberger, the Assistant Secretary of the Treasury;
* Samuel Bodman, Deputy Secretary of Commerce;
* Bonnie Cohen, Under Secretary of State for Management;
* Ruth Davis, the Director of the Foreign Service Institute;
* Lincoln Bloomfield, Assistant Secretary of State for Political Military Affairs;
* Jay Lefkowitz, General Counsel of the Office of Budget and Management;
* David Frum, Bush’s official White House speechwriter;
* Ken Melman, White House Political Director; and
* Brad Blakeman, White House Director of Scheduling.
The scene was now set: all they needed was an excuse to maneuver America into destroying Iraq for the benefit of Israel, according to the plan which Perle and Feith had already helped to map out.
9-11 Attacks Provide Pretext
This excuse was provided by the September 11, 2001, attacks on the World Trade Center and Pentagon. Carried out by Islamist extremists as revenge attacks on America for that nation’s support for Israel’s wars against the Arab world, the 9-11 attacks allowed the largely Jewish-dominated mass media to spring into action and bombard America—and the world—with all manner of lies and deceit claiming that Iraq was behind the attacks. 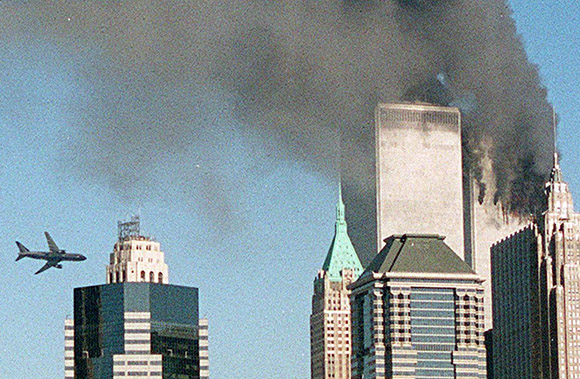 The CIA was ordered to manufacture a completely bogus “intelligence report” to support an invasion of Iraq. This was the origin of the “weapons of mass destruction” lie put forward by George Bush and Colin Powell as the justification for the invasion of Iraq.
Jewish Lobby in Britain
The situation was no different in Britain. In May 2003, a veteran left wing member of Britain’s House of Commons, Tam Dalyell, declared that Tony Blair had surrounded himself with a “cabal of Jewish advisers” who, he said, “are skewing British foreign policy on the Middle East in favour of the Israeli Government” (The Scotsman, May 4, 2003).
Dalyell went on to say that Blair was “unduly influenced” by figures including Lord Levy, Labour’s chief fund-raiser and Blair’s unofficial envoy to the Middle East, cabinet member Peter Mandelson and Foreign Secretary Jack Straw, who has, Dalyell revealed,  Jewish antecedents.
Dalyell also said that “Jews had taken control of America’s foreign policy,” and had “succeeded in pushing the US into war.” 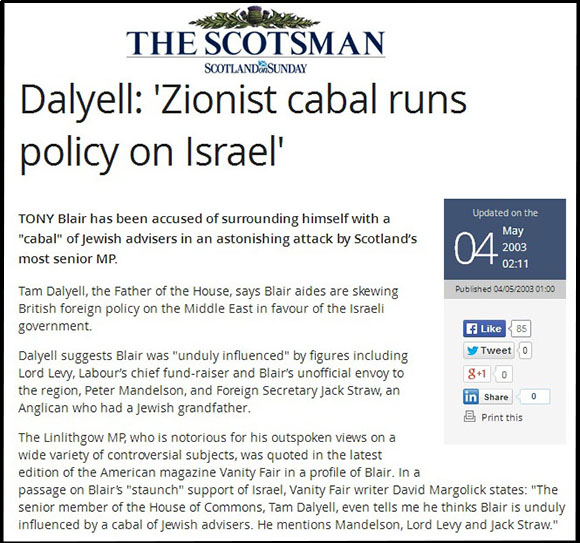 Jewish Lobby’s Role Identified by Congressmen, Senators and Army Chiefs
The Jewish influence in getting America to go to war with Iraq was widely known within the corridors of power in Washington DC. 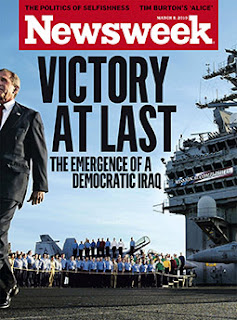 US Senator Ernest Hollings said in May 2004 that the US invaded Iraq “to secure Israel,” and “everybody knows it” (“Bush’s Failed Mideast Policy is Creating More Terrorism,” Charleston Post and Courier, May 14, 2004).
Hollings also pointed out the unwillingness of his Congressional colleagues to acknowledge the Jewish role in the war, saying that “nobody is willing to stand up and say what is going on.” Due to “the pressures we get politically,” he said, members of Congress uncritically support Israel and its policies” (Congressional Record — Senate, May 20, 2004, pages S5921-S5925.)
In August 2002, retired four-star US Army General and former NATO Supreme Allied Commander Wesley Clark also revealed the truth in an interview in the Guardian newspaper in London: “Those who favour this attack [by the US against Iraq] now will tell you candidly, and privately, that it is probably true that Saddam Hussein is no threat to the United States. But they are afraid at some point he might decide if he had a nuclear weapon to use it against Israel” (“US assumes UK Help in Iraq, says General,” The Guardian, August 20, 2002).
US congressman Jim Moran publicly acknowledged that Israel was behind the Iraq war: “If it were not for the strong support of the Jewish community for this war with Iraq, we would not be doing this” (“Lawmaker under fire for saying Jews support Iraq war,” CNN, March 12, 2003).
Israeli Media Openly Declared the Real Reason for the War
In Israel, the “Israel National News,” (Arutz Sheva), openly stated that “Of course this war against Iraq and Saddam Hussein is for us. Even Patrick J. Buchanan and Congressman Jim Moran know it. Stop and think for a moment: the last Gulf War in 1991 ended erev—just before—Purim. This Gulf War began motzei—just after—Shushan Purim. Get the picture? Read the Purim story in Megilat [Old Testament book of] Esther again? Haman, the proto-typical anti-Semite, plans mass murder of the Jews and in the end pays with his life, the life of his ten [innocent] sons—all hanged—and the Jews kill 75,800 members of the anti-Semitic—i.e. Nazi—party of the time” (“This War is for Us,” Arutz Sheva, March 26, 2003). 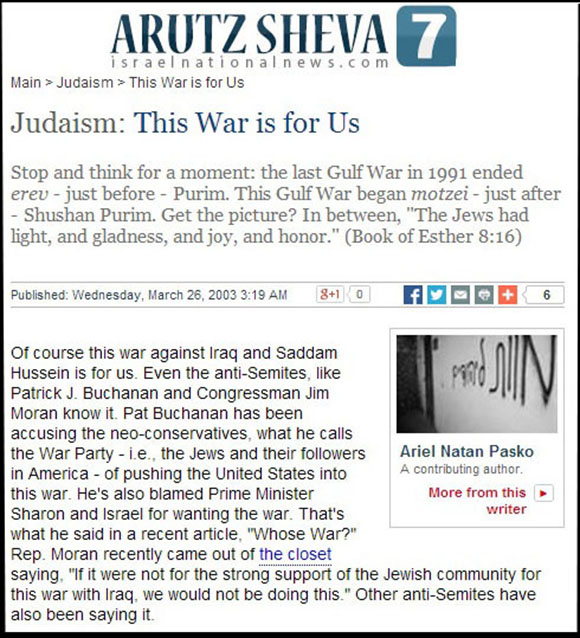 Another Israeli newspaper, Ha’aretz, reported as follows: “The war in Iraq was conceived by 25 neoconservative intellectuals, most of them Jewish, who are pushing President Bush to change the course of history” (“White Man’s Burden,” Ha’aretz, April 3, 2003). 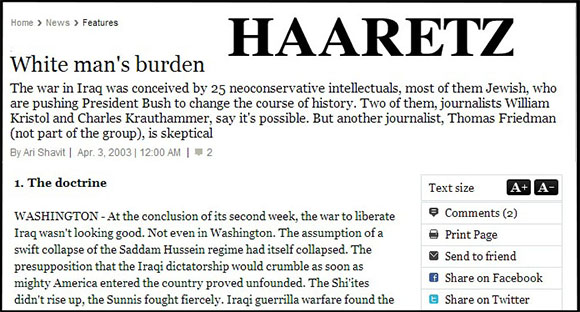 The Plan in Operation
The collapse of Iraq into powerless factionalism, and even the ongoing conflict in Syria, were therefore all mapped out by the Jewish neocons way back in 1996—and implemented by a carefully-placed team of activists who could use low-IQ and easily-manipulated Gentile front men such as George W Bush to carry it out.
The list of crimes for which these Jewish neocons—and their puppets—need to be prosecuted, grows longer as the tragedy in Iraq and Syria continues to unfold. 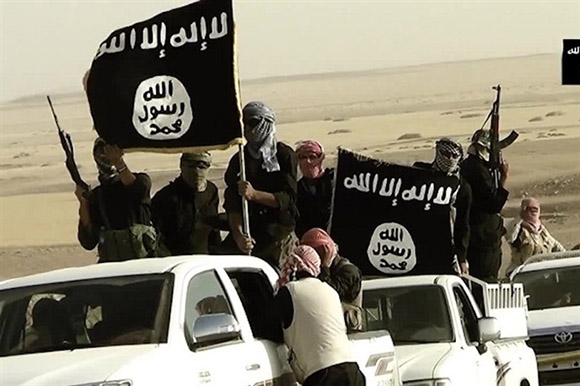