You are here: Home Europe
The Israeli government is actively aiding the Third World invasion of Europe—while at the same time making sure that no Third World “refugees” enter Israel, and those who do, are locked up in camps without trial and deported.
The shocking Jewish hypocrisy is evident when two recent news reports are compared: one in the New York Times, titled “Israel’s Chilly Reception for Asylum Seekers” (October 31, 2015), and another in the Jewish news service Israel21c, titled “To the refugees it doesn’t matter that we’re Israeli” (September 20, 2015). 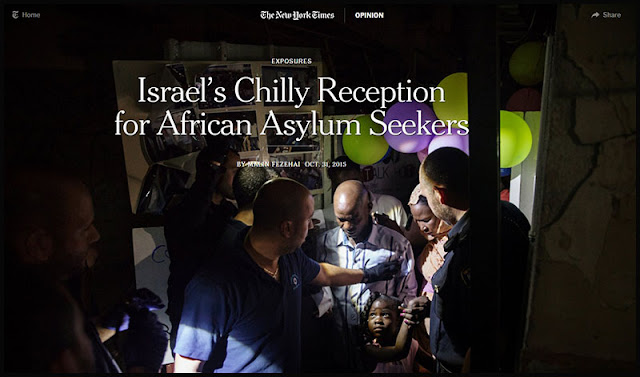 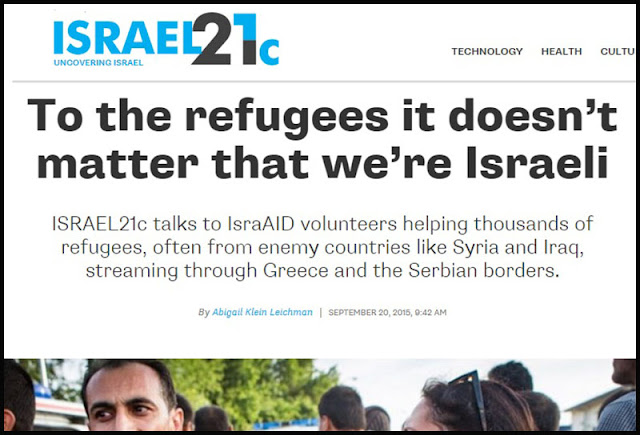 The Israel21c news service (set up by the former head of one of the most prominent Jewish lobbies in America, the American Israel Political Action Committee, AIPAC), article reveals that the official Israeli aid agency, IsraAID, has stationed “dozens” of full time paid staffers along the Greek coast and further inland.
Their only job is to provide material aid and support to the Third World invaders coming ashore, and to help them on into Germany, the article reveals. 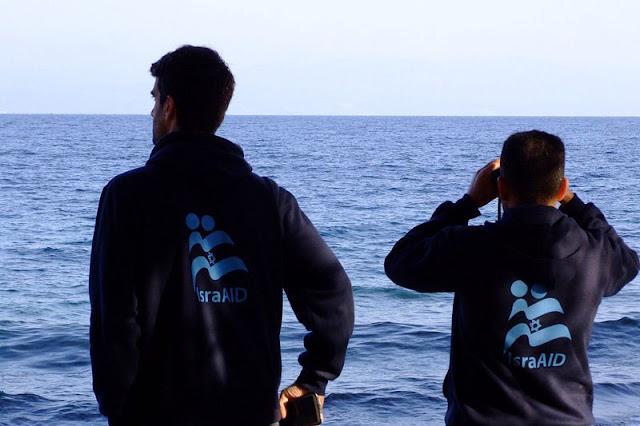 Among the Israeli Jews interviewed was IsraAID global programs manager, Naama Gorodischer, who is stationed on the Greek island of Lesbos. The article boasts about how these Jews are, quite literally, dragging the Third Worlders ashore into Europe: On September 13, the article says, Gorodischer “and other relief workers from IsraAID rescued newcomers whose boat had overturned.” 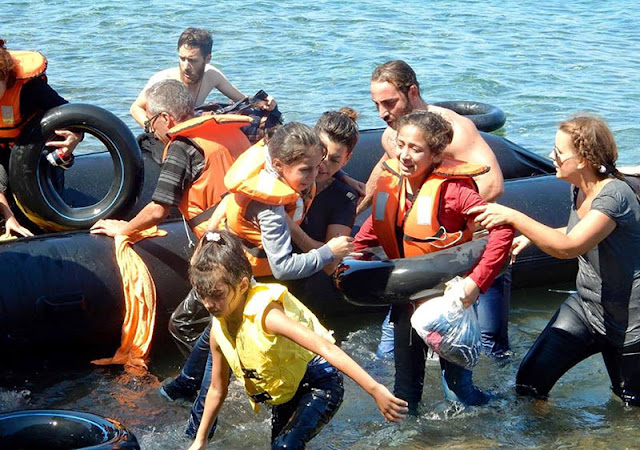 Israeli Jews working for IsraAID, including global programs manager, Naama Gorodischer, center, helping nonwhite invaders reach the shore after their boat overturned off the Greek coast, September 13, 2015.
The Israel21c article admits these “refugees” are not all from Syria (“In addition to Iraq and Syria, there are refugees from countries including Afghanistan, Pakistan, Sudan, and Somalia”), but nonetheless specialists have been sent “from Israel to assess the needs of thousands of refugees trying to enter Hungary from Serbia.”
IsraAID also is providing food, water, blankets, and “Journey of Hope” relief kits to refugees in Greece and Serbia, the article continued. At the same time, they distribute “dozens of baby carriers and baby slings donated by Israelis.” 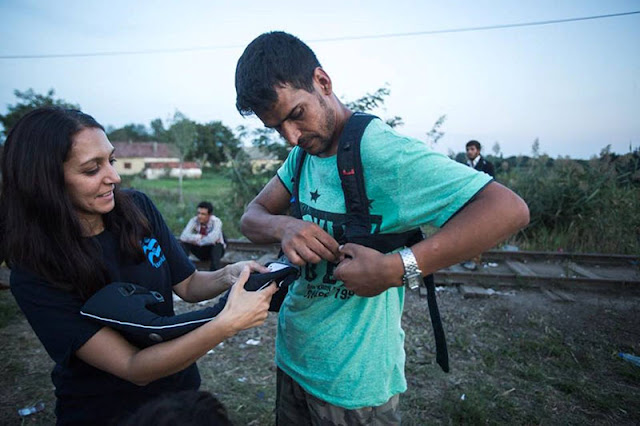 According to the IsraAID website, that agency’s “work” in Europe includes an “Advanced Emergency Team” on the ground providing basic medical and psychosocial support to refugees, as well as distributing “much needed emergency items, including baby slings.”
In addition, the IsraAID website says, the Jews have “sent an assessment and relief mission to Serbia and Croatia to determine both the short-term and long-term needs of both the refugee population crossing through Europe” and has launched a “Mobile Relief Unit in anticipation of Hungary’s stricter border controls.”
Finally, the IsraAID announcement boasts, it has “expanded its work to locations where refugees were being re-routed, on the Croatia side of the Serbian border, in several transit points, train and bus stations as well as in ad hoc camps that sprung up.  At its peak, IsraAID was among the first agencies providing relief to over 11,000 refugees crossing from Serbia into Croatia in under 24 hours.” 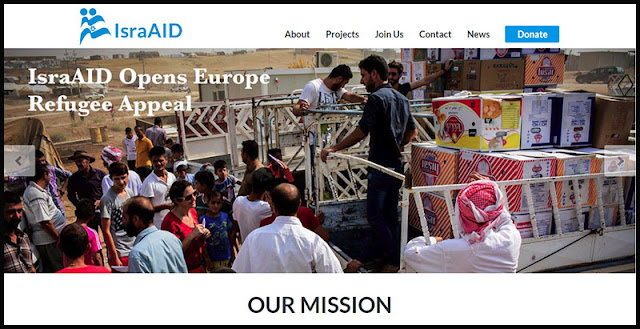 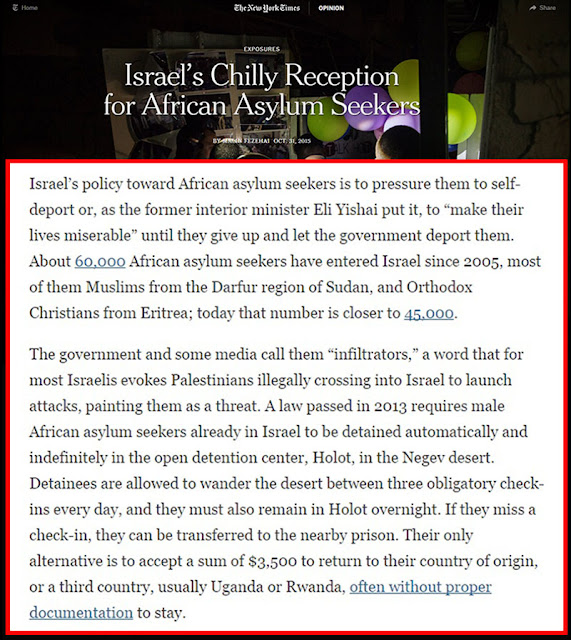 The New York Times inadvertently reveals the hypocrisy in its article:

Israel’s policy toward African asylum seekers is to pressure them to self-deport or, as the former interior minister Eli Yishai put it, to “make their lives miserable” until they give up and let the government deport them.

The New York Times goes on to say that the Israeli government officially describes all refugees as “infiltrators,” and that this is the word regularly used by the Israeli media to describe them as well.
Furthermore, a law passed in 2013 mandates that all male asylum seekers are automatically and indefinitely detained in a concentration camp set up specifically for the purpose in the Negev Desert, far away from the Jewish centers.
There they are made an offer of $3,500 to voluntarily return to their country of origin, or a third country, usually Uganda or Rwanda. If they turn down this offer, they are deported without further ado.
The Jews are quite open about the reason for their hardline approach. As the New York Times says, Prime Minister Benjamin Netanyahu warned that the arrival of “refugees” posed a “demographic” risk to Israel: “If we don’t stop their entry, the problem that currently stands at 60,000 could grow to 600,000, and that threatens our existence as a Jewish and democratic state,” he said.
So it is clear that the Jews understand—correctly—that a mass Third World invasion will destroy their country, and they are very clear and open about this fact.
Nonetheless, at the very same time, they are actively funding and aiding a mass Third World invasion of Europe—knowing full well that this will destroy Europe.
This overt hypocrisy cannot be a coincidence: it is the result of a malicious, deliberate policy, designed to destroy Europe and Europeans, while ensuring that Israel remains racially pure.