You are here: Home All News
Jews are a race, and not a religion, a new DNA test breakthrough in Israel has proven—and the test is currently under consideration for use by the Jewish ethnostate’s authorities to help prevent non-Jews from immigrating to that country and from marrying Jews, in line with its already existing anti-miscegnation laws. 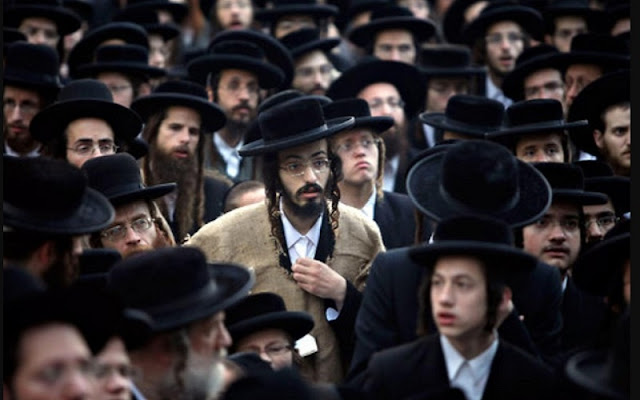 The DNA breakthrough was announced at a special conference held by Israel’s Puah Institute, the official body which “works with Jewish couples with fertility problems” around the world.
The research was carried out by the Eretz Hemdah Institute for Advanced Jewish Studies in Jerusalem, and was presented by that organization’s head, Rabbi Yosef Carmel, who also sits on the Gazit rabbinical court—one of the religious courts which controls Israeli citizenship and marriage eligibility rules.
Carmel told the Israeli news service Ynet News that the “Jewish gene,” can help prove one’s “Jewishness” in line with Jewish religious law.
The test—for female descended mitrochondrial DNA (which passes down unbroken ) can be undertaken with a simple saliva swab.
Ynet news enthusiastically told its Jewish readers that the “breakthrough study by Israeli experts on genetics and Jewish Halacha (the religious law) claim that the so-called ‘Jewish gene,’ can be identified by ‘using a sample of saliva, and can save a long  and complicated conversion process.’”
Rabbi Dov Popper, an adviser at the Puah Institute, added that researchers in Israel and the world have been studying mitochondrial DNA—structures within the cells— which a person receives only from his or her mother.
“We can find the gene with a simple blood or saliva test. As soon as you find the mitochondrial gene in a person, this serves as a considerable piece of evidence in proving his Jewish roots,” Rabbi Popper said.
The Eretz Hemdah Institute is preparing a paper to submit to the Chief Rabbinate n Jerusalem, detailing the Halachic-scientific breakthrough that claims: anyone whose Judaism can be proven genetically is legally (in the Jewish legal sense, that is) Jewish, Ynet news went on to say.
“People who wish to get married in the State of Israel via the Chief Rabbinate must be recognized as a Jew and prove own Jewish dynasty,” the Ynet article continued, confirming the already well-known fact that in Israel it is illegal for a non-Jew to marry a Jew.
Ynet News went on to explain:
According to the Jewish law, one considers as a Jew only if he was born to a Jewish mother. Otherwise, he has to provide proof of Judaism several generations back in the form of documents—such as birth and marriage certificates.
This has already made a problem for over 400,000 immigrants especially from the former Soviet Union, who couldn’t provide all family files.
Jewish people without the proof for their Jewish roots called “undefined,” and must undergo a long, hard and toilsome religious conversion according to the “Halacha.” This frightening process many trying to avoid.
“If the Chief Rabbinate accepts the gene research, this would be a significant change” for the hundreds of thousands who considered “undefined,” Rabbi Carmel said.
Rabbi Menachem Burstein, the head of the Puah Institute added “We began researching this because of the issue of egg donation and the ramifications that would have on the Jewishness of the newborn baby.”
*  Although Jewish lobby pressure groups such as the ADL and SPLC which operate in white countries in Europe and North America, are always the first to condemn any suggestion that genes and race are interconnected, they also all fanatically support Israel which actively   uses genetics to help keep the Jewish racial strain pure.
There is, of course, nothing wrong with using the science of genetics for racial improvement, and it is a field of study which should in fact be mandatory across the board for all races.
However, under the current hypocritical modern Jewish-lobby dominated societal structure, only Jews are allowed to practice the science of racial purity, and any white person who dares suggest following the same ideas is attacked as a “bigot” or “racist” by that same Jewish lobby.

More than Half of World’s Nonwhite Females use Skin Lighteners, WHO Says