You are here: Home All News
A new analysis of the H-2B “guest worker” visa program data by the Center for Immigration Studies (CIS) has shown that U.S. companies are hiring H-2B guest workers in large numbers for jobs even in areas of high unemployment, further undermining the attempts of ordinary Americans to find work and earn a living. 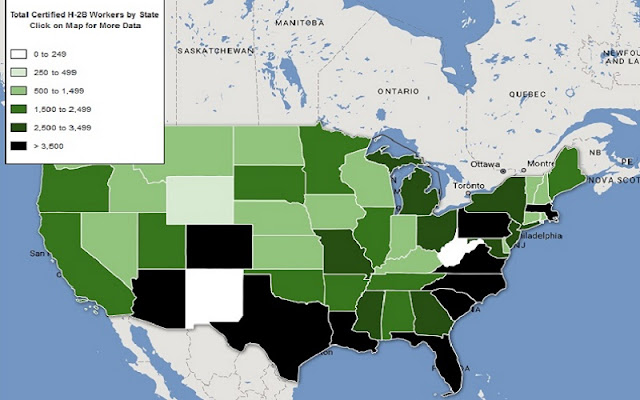 The CIS study said that the H-2B visas are supposed to be for seasonal or temporary non-agricultural work, and issued for up to three years at a time.  However, a series of interactive maps provided by the CIS shows the extent of the treason being perpetrated against Amercans.
One map shows where employers are hiring H-2B workers.  The top 10 states for H-2B hiring are (in order):  Texas, Florida, Colorado, Massachusetts, Louisiana, Pennsylvania, Virginia, North Carolina, Arizona, and South Carolina.
Fifteen percent of all H-2B workers approved are certified for jobs in Texas (18,000 workers out of 119,000 approved in 2016).  Not all of these workers end up coming; in 2016, the State Department issued 84,600 H-2B visas.
A second map shows the specific city or town in which the H-2B jobs were authorized.  The top individual locations with the most H-2B workers are in Alaska.
But jurisdictions with high numbers are found throughout the country: Phoenix, Arizona; in the resort island of Mackinac, Michigan; Myrtle Beach, South Carolina; and on the exclusive island of Nantucket, Massachusetts.
A third map shows where employers are located who were approved for 150 H-2B workers or more and the location of the H-2B jobs paying $25 an hour or more.
Silver Bay Seafoods in Sitka, Alaska is the employer approved for the most H-2B workers, with 971 guest workers certified.  The Mississippi employer Faith Forestry Service comes in second with 704 H-2B workers approved.  AJA Video Systems had the highest paid H-2B worker, at the rate of $68.45/hr for a job with no education requirement.
Jessica Vaughan, the Center’s director of policy studies, said, “The H-2B program was sold to Congress as a way to help employers fill short-term labor shortages of unskilled workers to do jobs that could not be filled by U.S. workers.
“As has been the case in all guest worker programs, now a lucrative recruiting industry has become established that profits from the placement of foreign guest workers with employers who have become addicted to the workers year after year, and who are now a permanent fixture – even in areas with many available U.S. workers, especially many young workers.  And these are not necessarily low-paying jobs, but they are effectively off-limits to U.S. workers.”
Some companies use the program to hire guest workers as landscapers, lifeguards, carnival workers, factory workers, cooks, maids and fishery workers.
“But others were approved to bring in engineers, tax preparers, soccer coaches and occupational therapists – jobs that clearly are not unskilled and not so exotic that no Americans can be found to fill.  These cases suggest that the level of scrutiny for visa approval is inadequate and that employers may be using the program as a way around the rules of other guest worker programs,” the CIS said.
More than 90 percent of the H-2B workers come from five countries:  Mexico, Jamaica, Guatemala, South Africa and the United Kingdom.
The Trump administration is under pressure from some members of Congress to dramatically expand the number of workers allowed to enter. North Carolina Senator Thom Tillis is so determined to secure the entry of more H-2B workers that he is holding up the confirmation of the man chosen to lead USCIS, the agency that approves employer requests for guest workers, until DHS announces an increase in visas.
DHS has submitted its proposed increase to the Office of Management and Budget for review, and an announcement of the new total of H-2B visas allowed is expected any day.
Says Vaughan:  “The government’s own data shows that the responsible agencies have some work to do to ensure that this program is not abused and that it is not shutting out U.S. workers from opportunities. At the same time, members of Congress need to think about how this program may be working to foster employer dependency on these workers, and whether that may be disadvantaging U.S. workers, and especially American youths.  Why is the government allowing employers to bring in tens of thousands of unskilled workers when there are millions of people already here who can do this work?”