The 29-year-old Egyptian identified by French media as the individual who attacked soldiers at the world-famous Louvre Museum on February 3 was a legal tourist who entered France a week before the attack—and had declared his loyalty to ISIS on Twitter. 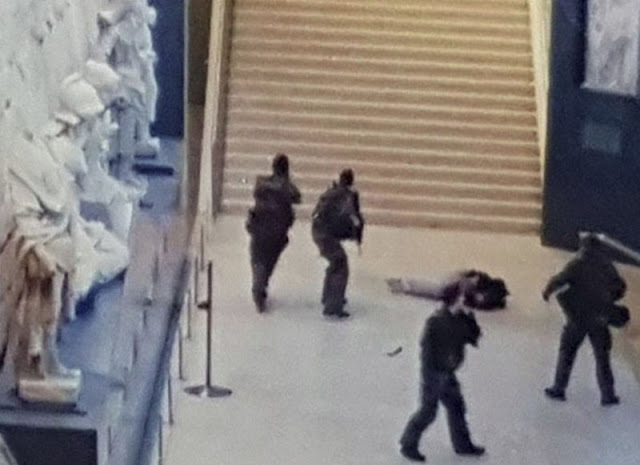 Although French authorities have, as of time of writing, not yet formally identified the attacker, the L’Express newspaper said that he had been identified as one E. H. Abdullah, an Egyptian national resident in Dubai in the United Arab Emirates.
Abdullah arrived at the Roissy-Charles-de-Gaulle airport outside Paris on January 26. He applied for a visa to visit France on October 30, and it had been granted, allowing him to legally enter the country—and the entire Schengen area.
On the day of his arrival, he rented a hotel room located on the Rue Ponthieu, in the 8th arrondissement of Paris. After the attack, anti-terrorist police searched the room and found € 965 in cash, two machete cases, the invoice for the purchase of the two machetes he used in the attack, an iPad, several prepaid phone cards, a cell phone battery, and already prepared visas for Saudi Arabia and Turkey.
He had been booked back on a flight to Dubai on February 5, possibly indicating that he hoped to survive the attack.
The L’Express also revealed that on his Twitter account, he sent out several tweets leading up to the attack, with one reading “In the name of Allah (…) for our brothers in Syria and the fighters of the whole world,” and then, one minute later, referring specifically to ISIS by name.
It is also still unclear exactly what his intentions were. When arrested, he was found to be in possession of two paint bombs, indicating that he wanted to attack Western or Christian art in the Louvre Museum.
That museum contains many famous works by artists such as Leonardo da Vinci, Boticelli, Carvaggio, Raphael, Rembrandt, and countless others, all of which might have been permanently damaged by a paint bomb attack.
The incident has also revealed the essential truth behind U.S. President Donald Trump’s moves to subject all tourists from Muslim nations to “extreme vetting” before letting them in.
Trump lost no time in pointing this out, saying on his Twitter account that “a new radical Islamic terrorist has just attacked in Louvre Museum in Paris. Tourists were locked down. France on edge again. GET SMART U.S.”