You are here: Home All News
Angela Merkel’s Christian Democratic Union (CDU) party has romped home to a convincing victory in state elections in Saarland, garnering more than 40 percent of the vote, up from 35 percent at the last election—while the populist Alternative für Deutschland (AfD) scraped into the state legislature with just 6.2 percent. 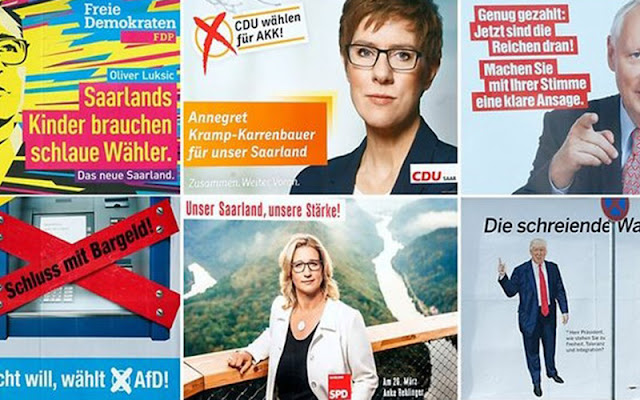 The election—widely seen as a litmus test for Merkel’s re-election chances later this year—produced an overwhelming majority for the political forces which have brought the mass Third World invasion to Germany.
The CDU polled 217,275 votes, or 40.7 percent of the vote, while its far-left coalition partner, the Social Democratic Party (SPD)—against whom it was supposed to be fighting—polled 157,841, or 29.6 percent of the vote.
Third placed was the former East German Communist Party, now calling itself The Left (Die Linke), which polled 68,566 votes, or 12.9 percent. Fourth placed was the AfD, which polled 32,935 votes, or 6.2 percent.
Parties which failed to make the 5 percent hurdle to gain representation in the state parliament were as follows: Alliance ’90/The Greens (Bündnis 90/Die Grünen): 21,392, or 4.0 percent; The Free Democratic Party (Freie Demokratische Partei): 17,419 votes, or 3.3 percent; The Family Party (Familienpartei Deutschlands): 4,433 votes, or 0.8 percent; The Pirate Party (Piratenpartei Deutschland): 3,979 votes, or 0.7 percent; and last came the National Democratic Party (Nationaldemokratische Partei Deutschlands) with 3,744 votes, or 0.7 percent.
Many non-voters were mobilized in the Saarland elections, and the turnout increased by ten points to nearly 70 percent. Most of these “new” votes went to the CDU, in contrast to previous elections where new voter turnout favored the AfD.
The AfD now has representation in 11 of the 16 state parliaments in Germany, but appears unlikely to achieve the significant breakthrough it requires to avert the ongoing invasion of that country.
Two further state elections in May (Schleswig-Holstein and North Rhine-Westphalia) will provide a further indication of the political direction Germans appear to be choosing.