You are here: Home All News
NASA scientists have announced that they have discovered microbe life forms that have been living “for over 50,000 years” trapped within crystals in the famous Naica Cave in Mexico. If accurate, these microbe life forms will be one of the oldest living organisms yet discovered on earth.
The cave where these microbes live is famous in Mexico’s Chihuahua state for its fairytale-like massive crystals and extreme conditions. 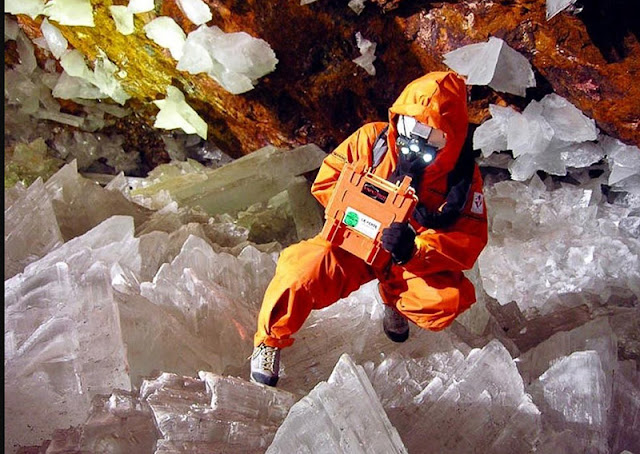 According to NASA, the microbes have been dormant within trapped fluid inclusions in massive gypsum crystals.
Uniquely, the microbes have existed entirely on heavy minerals such as iron and manganese to create energy. They have adapted to one of the most hostile environments on Earth, evidence that life finds a way to cope in extreme conditions.
The Naica caves were first found by miners about a hundred years ago while looking for silver. The cave system (980 feet below the surface of the Earth) reaches up to 136°F and 99% humidity, conditions that require scientists to wear modified spacesuits with cooling packs while studying the cave.
The massive gypsum crystals have grown up to 39 feet long and 13 feet in diameter, weighing up to 55 tons per crystal.
The microbes were found living within fluid inclusions in the gypsum crystals at a depth where the absence of light requires life to utilize chemosynthesis to survive.
Although the research has not yet been peer reviewed and published, findings were described by Dr. Penelope Boston, director of the NASA Astrobiology Institute during an annual meeting of the American Association for the Advancement of Science (AAAS).
The NASA scientists were able to sample the microbes, bring them back to the lab, and re-animate the combination of microbes and viruses.
Boston plans for additional genetic tests on the revived microbes which are now growing in lab conditions.
Approximately 40 different strains of microbes and some viruses were revived and initial results suggest they are very different genetically from anything previously known. The closest relatives to the microbes are 10 percent different genetically.
“Other people have made longer-term claims for the antiquity of organisms that were still alive, but in this case these organisms are all very extraordinary—they are not very closely related to anything in the known genetic databases,” said Dr. Boston.
This is not the oldest living organism ever found. That honor belongs to a half million-year-old living bacteria which was uncovered from permafrost layers in Siberia and northern Canada.