You are here: Home Americas
The massive nonwhite crime plague which continues to tear up almost every major US city has made that country the 114th least peaceful nation on earth, according to the latest “Global Peace Index” (GPI) report, which ranks 163 states “according to their level of peacefulness.” 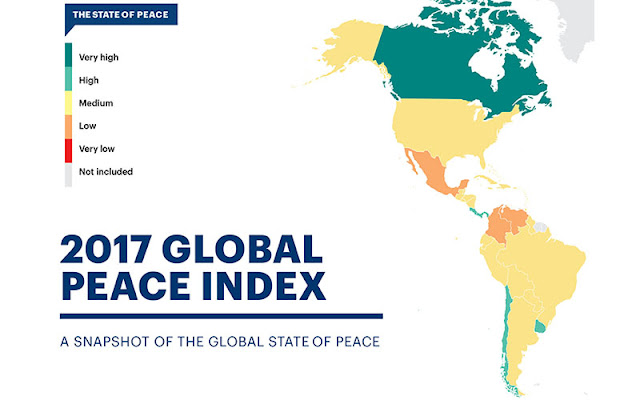 The report, produced each year for the last eleven years by the Institute for Economics and Peace (IEP), “measures the state of peace using three thematic domains: the level of Societal Safety and Security; the extent of Ongoing Domestic and International Conflict; and the degree of Militarization.”
The report said that the North America regional score had worsened due to a “deterioration in the score for level of perceived criminality in society.”
Furthermore, the report said, “social problems within the US are also likely to become more entrenched and racial tensions may continue to simmer.
“Reflecting these tensions, rising homicide rates in several major American cities led to a deterioration in the homicide rate indicator, contributing to the decline in the US’s peace score.”
The US drop in rankings means that Armenia and Rwanda are now ahead of America, with El Salvador and China close behind.
Iceland remains the most peaceful country in the world, a position it has held since 2008. It is joined at the top of the index by New Zealand, Portugal, Austria, and Denmark, all of which were ranked highly in last year’s GPI.
Europe remains the most peaceful region in the world, with eight of the ten most peaceful countries coming from this region. However, while 23 of the 36 countries improved, the average peace score did not change notably, due to the substantial deterioration in Turkey, the impact of the terrorist attacks in Brussels, Nice, and Paris, and deteriorating relations between Russia and its Nordic neighbors.
* Syria is, not surprisingly, ranked as the most violent country on earth—but in the 2008 report, that country was ranked 75th—an indication of the impact the Jewish-lobby-led military interference in Syria has had on that nation.
* Israel is ranked as the 144th most violent nation in the latest report.