In yet another example of the anti-white hatred which characterizes the current political establishment in Europe, white people in Germany have been—completely unjustifiably—blamed because so few nonwhites want to join the police in that country. 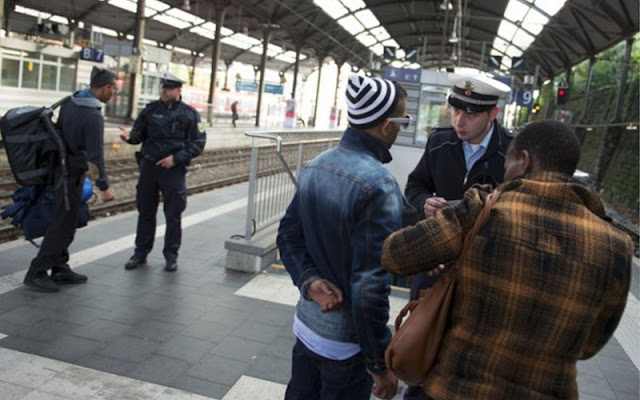 The latest claims have been made in a report titled Wie steht es um die Vielfalt bei der Polizei? (“What about the diversity of the police?”) issued by the Mediendienst Integration (“Media Integration Service”).
The Mediendienst Integration is an organization which describes itself as an “information platform for media producers” which provides “essential information on the subject areas of migration, integration, and asylum in Germany,” and counts many of the heads of the major German media companies on its advisory board.
The report—faithfully reproduced by the controlled media in Germany—says that “minorities are still significantly underrepresented in most of Germany’s state police forces, despite efforts to address the issue.”
In Schleswig-Holstein, for example, “only” 5.4 percent of applicants were of an “immigrant background,” comprising 3.5 percent of new recruits, against an “immigrant population of 13.2 percent,” the report revealed.
In Germany’s most populous state, North Rhine-Westphalia, “only” 11.7 percent of recruits had an “immigrant background,” compared to 25.6 percent of the population.
In Berlin and Saxony-Anhalt, however, the report continued, police forces had a “percentage of immigrant-background recruits above the population average.”
The Deutsche Welle coverage of the report went on to quote a sociologist at Berlin’s Free University, one Aleksandra Lewicki—who specializes in studying “institutional racism in Germany and the UK.”
According to the DW, Lewicki said that “police forces in Britain have increasingly tried to recruit ethnic minority populations, but whether different recruitment strategies on their own combat institutional racism is another matter.”
“It’s one of those measures that’s easily done,” she told DW. “By bringing people in they seem to think they can fulfill some sort of magic to show they’re not racist—which are partly wrong assumptions. Increasing the number of ethnic minority people doesn’t necessarily remedy racism.”
For Lewicki, the various parliamentary inquiries that examined the “police failings” have not sufficiently clarified the situation. “Their findings point to all the symptoms of institutional racism, but they don’t conclude that what they see is institutional racism,” she said.
In other words, it is “white racism” which is to blame once again for the fact that so few nonwhites want to join the police.
This same sort of leftist “logic” is used all over the Western world to excuse high nonwhite crime conviction rates—because the “judicial system is institutionally racist,” or low nonwhite academic achievement—because the “educational system is institutionally racist.”
The opposite is in fact true: generally speaking, white societies bend over backward to accommodate nonwhites through affirmative action and blatant anti-white discrimination in job allocation, public housing, and even in university placements.
Yet despite all of that, the failure of nonwhites to achieve is always still blamed on white people—a symptom of the establishment’s inherent anti-white bias.