You are here: Home Europe
“Our commitment to the people of Germany is not unconstitutional,” the leader of the National Democratic Party of Germany (NPD), Frank Franz, said in his reaction to the second failed attempt by the Stasi state to ban his party.
The German Constitutional Court in Karlsruhe today turned down an application brought by the Federal States—all controlled by a combination of the major “democratic” parties—to ban the NPD on the grounds that its policy to keep Germany German was “unconstitutional” and a “threat to democracy.” 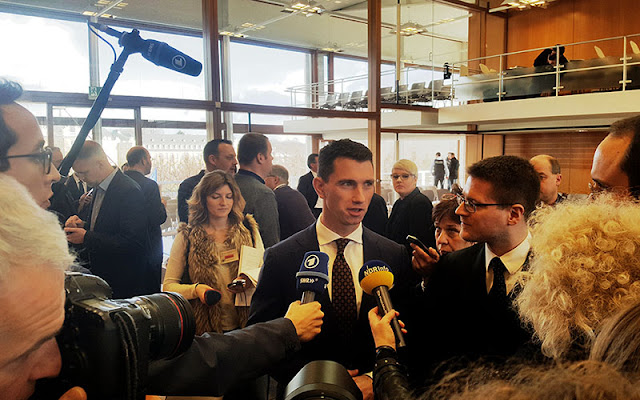 NPD leader Franz Frank addresses the media after the court’s decision.
NPD leader Frank—who was clearly overjoyed at the outcome—said that it was “not just the NPD in the stocks today, but freedom of expression.”
He said the attempt to ban the NPD was also an attempt at banning “an entire canon of expression, [namely] the criticism of mass immigration, that commitment to the people and their inheritance, and the demand for German national sovereignty.
“The NPD will now continue the fight to ensure that the German people remain sovereign in their own country.”
Frank added that the flood of messages of congratulations he was receiving gave him courage that there are still many compatriots who want to keep Germany for the Germans.
“The Karlsruhe decision is an impetus for democracy and freedom of expression, and will boost us in our current election campaign in Saarland,” he said.
The court’s decision was preceded by a judgment which contained a barrage of insults and abuse, with the judges parroting the claims that the NPD was against “human dignity, integrity, and equality before the law,” and wanted to “replace the constitutional state of the Basic Law by an authoritarian nation state which was racist in character,” which “foresees no room for the participation of ethnic non-Germans in the formation of political will.”
The only reason why they did not uphold the attempt to ban the party was that it was, in their opinion, too weak to achieve its goals.
The implication of this decision is that if the party was, for example, attracting support levels of the Alternative für Deutschland (AfD) party, then they would have banned it.
This open admission by the court’s judges reveals the true rationale of these “democrats”—namely that they will ban any attempt by the electorate to replace the current political parties by democratic means.
The Stasi state’s previous attempt to ban the NPD in 2003  failed after it was revealed that the internal state security agency had been responsible for generating the “evidence showing how bad the party was” through its planted agents within the party. 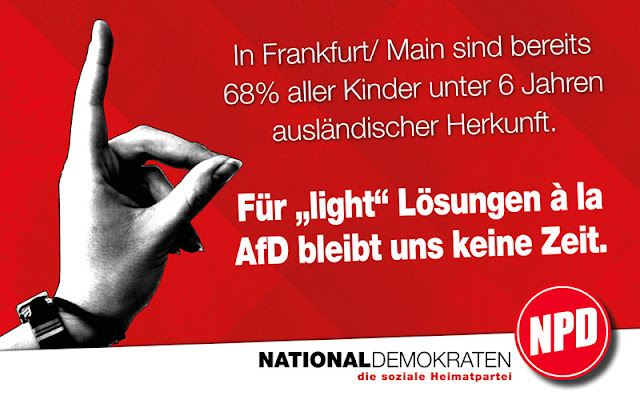 An NPD election poster currently being used in the Saarland. It reads: “68 percent of all under six-year-olds in Frankfurt are of foreign heritage. This is why we have no time for the ‘AfD-lite’ solutions.”