You are here: Home Americas
The Presbyterian First United Church in Westboro, Ottowa, Canada, has printed 200 lawn signs in English, French, and Arabic for its congregation to welcome Muslim invaders into the country crossing the border from America. 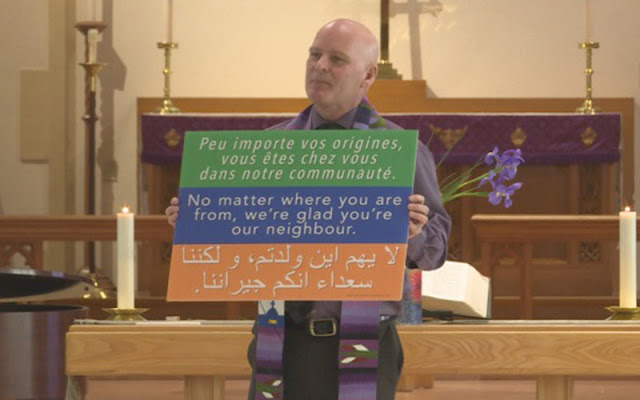 According to a local news report, the First United Church is “trying to use lawn signs to build community and combat negativity and racism being directed towards refugees in both Canada and the United States.”
The sighs read “No matter where you are from, we’re glad you’re our neighbour,” in English, French, and Arabic.
Rev. Brian Cornelius said the church has “helped community groups in Ottawa sponsor about 100 refugees and the signs are a visible way to fight some of the recent negativity seen and heard in the United States.”
“Canada is not exempt from that rhetoric,” added Cornelius. “We recognize that we do have incidents of racism, that we have to deal with prejudice in our own society and so we just want to be a part of being that voice of welcome.”
Wendy Snelgrove is a member of the congregation who bought a sign for $10 following a church service on Sunday. She said her family wanted one because they are proud of the work being done in Ottawa.
“I don’t know whether they’re needed in a sense of overcoming something negative but they’re a great statement, a great symbol that we really do value the contributions that refugees and other immigrants bring, that people truly are welcome,” she said.
Lisa Nafziger first brought the idea of the signs to the church after seeing similar campaigns in the United States and southern Ontario. With all the work First United Church has done to help sponsor refugees, she said the signs were a good fit, and a way to make a public statement.